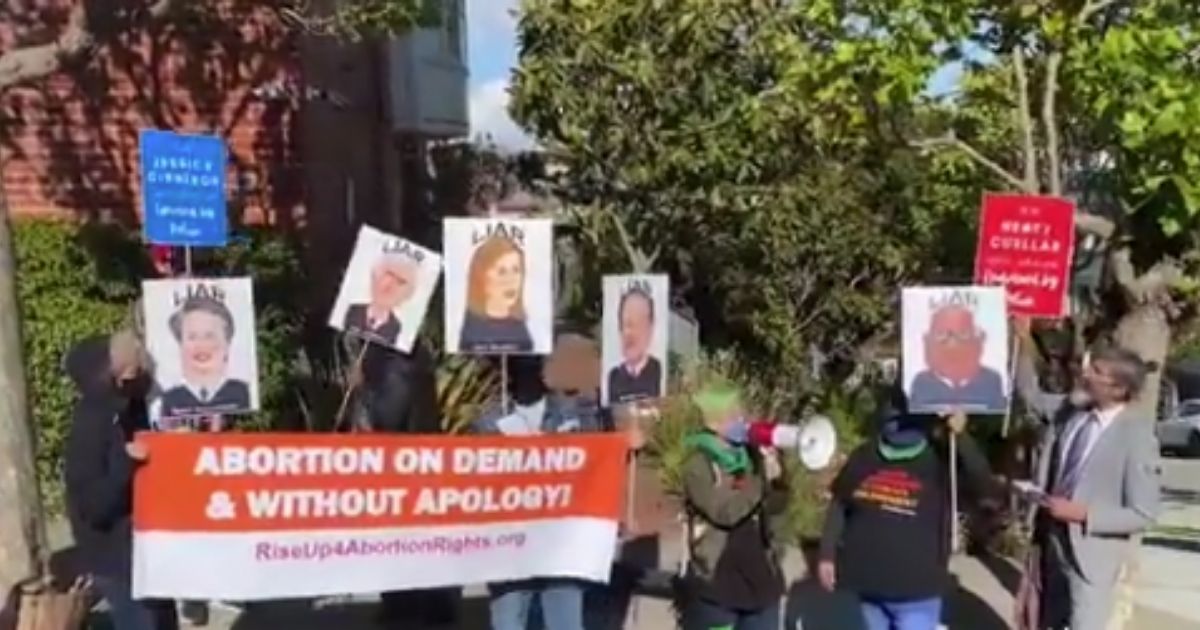 The following article, Pro-Abortion Mob Shows Up for Protest Outside Nancy Pelosi’s House, was first published on Flag And Cross.

Pro-abortion protesters arrived at the home of a high-ranking government official on Tuesday.

But they weren’t targeting a Republican or a Supreme Court justice who appears to support the draft ruling that would overturn Roe v. Wade.

Instead, they were targeting Speaker of the House Nancy Pelosi.

The activists are demanding that Pelosi take action to halt the potential ruling, accusing the Democratic Party of failing to defend the legal right to abortion.

Just days ago Nancy endorsed these type of protests outside SCOTUS Justices homes, now she gets a taste of her own medicine pic.twitter.com/5lNl53uQ7p

Protesters on Wednesday carried a sign criticizing Henry Cuellar, a Texas Democrat who has been targeted by progressives for refusing to sign off on full support for unlimited abortion.

The left-wing demonstrators called for “abortion on demand and without apology.”

“Forced pregnancy is a human rights violation” Congressional candidate Shahid Buttar, who is running against Pelosi in her House district in California, speaks at today’s protest for abortion rights pic.twitter.com/jtyp9LYRRU

Ruth Sent Us, a pro-abortion group that advertised protests outside of Supreme Court justices’ homes, promoted the Tuesday protest outside Pelosi’s house on Twitter.

The pro-abortion activists at Pelosi’s mansion in an ultra-affluent neighborhood of San Francisco demanded the powerful Democrat “investigate the corrupt justices” and “save abortion,” according to Fox News.

This isn’t the first time Pelosi’s home has been the target of protests — not by conservatives, but by the left.

Last year, the House speaker’s home was vandalized with a pig’s head and fake blood over Pelosi’s unwillingness to ram through coronavirus stimulus checks, according to KRON-TV.

Protests outside the homes of Supreme Court justices over the weekend drew condemnation from Republicans, although liberals proved less willing to condemn the political harassment.

Pelosi herself had called on the left to pressure the Supreme Court by “weighing in” on the draft ruling in an MSNBC segment last week.

Meanwhile, far-left groups are currently publishing the private addresses of justices’ homes to encourage protesters to protest there. pic.twitter.com/8LadBrxNqi

If the Supreme Court were to overturn Roe v. Wade, it wouldn’t ban abortion. Instead, states would be free to craft their own policies on abortion, just as they did before the 1973 court ruling.