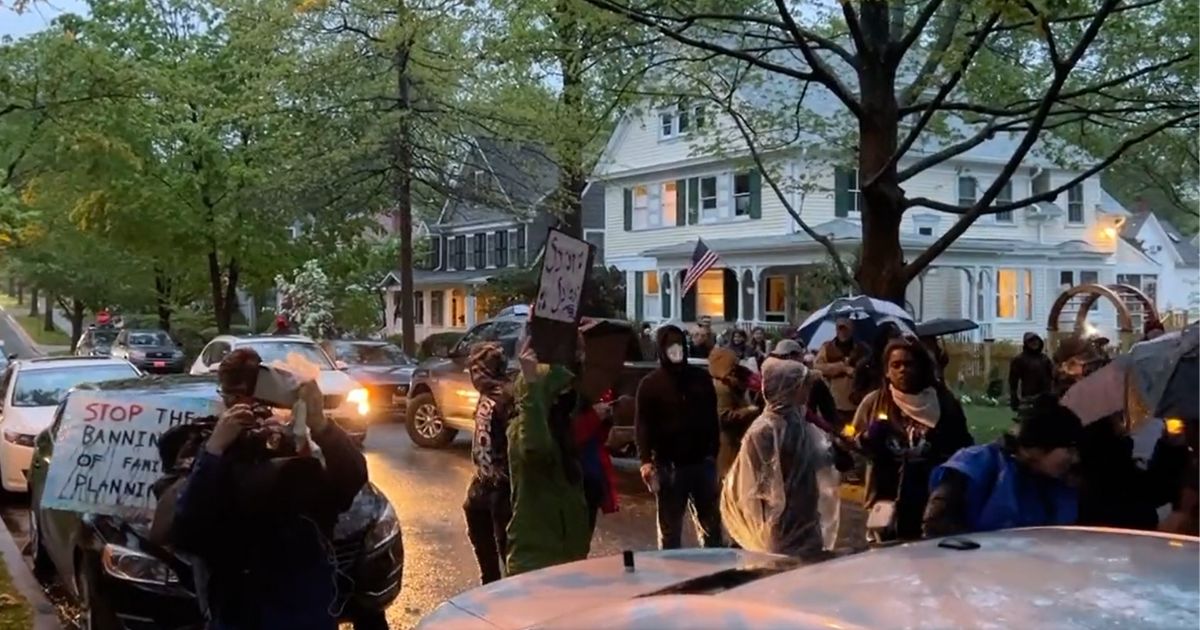 The following article, Confirmed: Protesters at SCOTUS Justices’ Homes Can Be Imprisoned Under Federal Law, was first published on Flag And Cross.

Pro-abortion protesters who have been gathering outside the homes of U.S. Supreme Court justices have been put on notice that they might be guilty of an infraction similar to one with which some Jan. 6, 2021, Capitol protesters have been charged.

Over the weekend, pro-abortion activists infested the streets, sidewalks and yards of the private residences of several justices — including Chief Justice John Roberts and Justice Brett Kavanaugh — in protest over the leaked Supreme Court draft decision that, if confirmed, would overturn the landmark 1973 Roe v. Wade ruling that legalized abortion.

The marchers have made it to what appears to be Justice Kavanaugh’s house. pic.twitter.com/c5YJMULMv7

The group Ruth Sent Us has planned another protest targeting justices’ homes on Wednesday.

The demonstrations so alarmed officials that the author of the draft decision, Justice Samuel Alito, was moved to an undisclosed location along with his family to keep them safe in the face of death threats from leftists.

Many, though, are pointing out that there is a federal law on the books that outlaws protests like these designed to interfere with, obstruct or impede the administration of justice.

18 U.S.C. § 1507 prohibits attempts to intimidate judges into changing their rulings.

The statute reads: “Whoever, with the intent of interfering with, obstructing, or impeding the administration of justice, or with the intent of influencing any judge, juror, witness, or court officer, in the discharge of his duty, pickets or parades in or near a building housing a court of the United States, or in or near a building or residence occupied or used by such judge, juror, witness, or court officer, or with such intent uses any sound-truck or similar device or resorts to any other demonstration in or near any such building or residence, shall be fined under this title or imprisoned not more than one year, or both.”

The law could not be more clear.

But, as conservative writer Cassandra Fairbanks pointed out on Saturday, that provision is similar to another under which several of those arrested for participating in the Jan. 6 incursion of the U.S. Capitol have been charged.

As Fairbanks noted, many of those detainees have been charged with “violating 40 U.S. Code § 5104, which bans ‘parade, demonstrate, or picket in any of the Capitol Buildings.'”

“Many were additionally charged under 18 U.S. Code § 1512, which prohibits protests that ‘otherwise obstructs, influences, or impedes any official proceeding, or attempts to do so,'” she added.

The violations involved in the targeting of justices’ homes seem clear. While courts and prosecutors often give wide leeway to protesters engaging in their First Amendment rights, many of the demonstrators appear to be seeking to intimidate the justices, some with threats of violence.

The Washington Post wrote of organizer Lacie Wooten-Holway, “If the conservative justices are considering rolling back a precedent that protects what people choose to do with their own bodies, she says, then no home address is out of bounds.”

“We’re about to get doomsday, so I’m not going to be civil to that man at all,” Wooten-Holway added in reference to Kavanaugh.

Despite the mounting threats, the White House has refused to denounce the marchers who gathered outside the residences of the justices.

White House press secretary Jen Psaki said on Thursday that the president and White House “certainly encourage people to keep it peaceful and not resort to any level of violence,” but she refused to condemn the protests at the justices’ homes.

The demonstrations expose a lot of hypocrisy among leftists.

First, they have been perfectly happy when the democratic and judicial processes went their way and legitimized their political positions. But the second the same process swings in the other direction, suddenly they are bellowing that it is all somehow illegitimate.

Further, their constant claim that abortion will be outlawed if Roe v. Wade is overturned is not true. Even the draft ruling about which they are so furious directly says that access to abortion is not ended by overturning the ruling.

Instead, what the draft ruling would do is eliminate the judicial fiat decision over abortion and return the issue to the states for voters and their representatives to make their own decisions on what to do about the matter. Why do these Democrats stand against democracy?

Further, despite the shrill proclamations of pro-abortionists, the draft ruling would not lead to overturning the right to travel, gay marriage or access to birth control. Indeed, right in the draft, Alito noted that the ruling has no bearing on other issues.

“Nothing in this opinion should be understood to cast doubt on precedents that do not concern abortion.”

If the left wants to have tribunals to jail participants in the Jan. 6 incursion, one has to wonder when we’ll get a congressional investigation into those who are breaking the law now.

C’mon man! You know the pieceful protestors, at the homes of the SCOTUS, will be prosecuted as fervently as the other Democrat protestors at last years riots.

CAN be, this does not mean they ever will be.