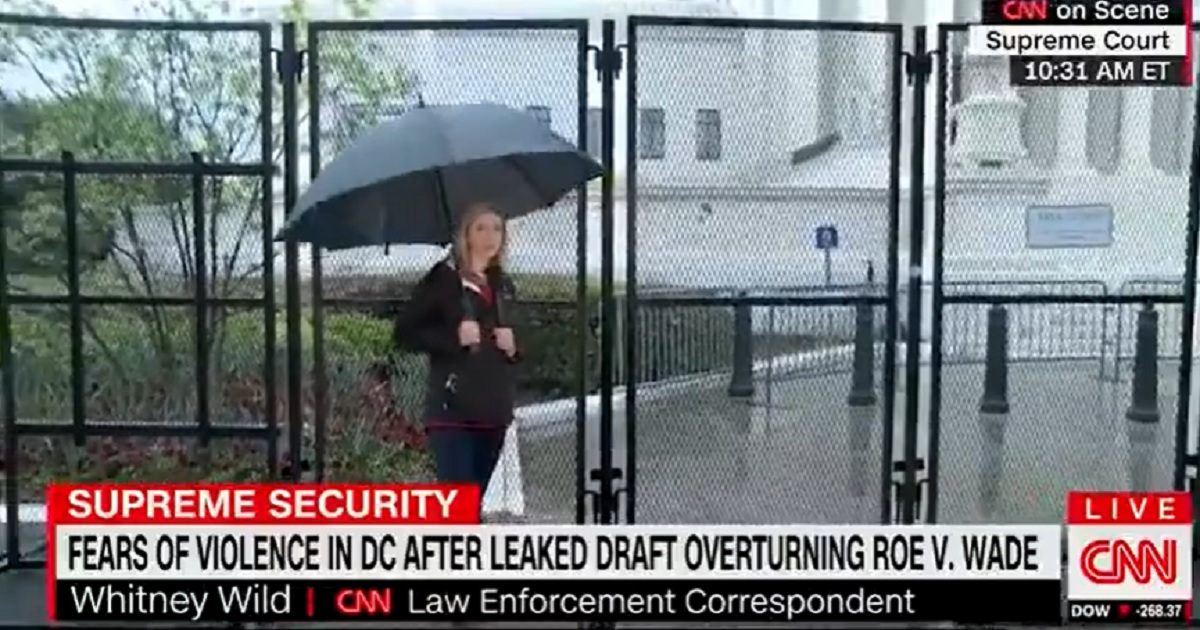 The following article, CNN Report About Anticipated Violence Over Roe v Wade Draft Gets it Terribly Wrong, was first published on Flag And Cross.

Last week’s leak of a Supreme Court draft opinion that would overturn Roe v. Wade sent shockwaves throughout Washington and has sparked an unprecedented level of crazy among liberals.

I had to read a Friday CNN report twice to fully grasp the degree of spin the network tried to pass off as news. Although CNN is known for its journalistic recklessness, this story was over the top.

That makes sense. After all, it’s not everyday a radical activist group publishes a map with pins indicating the home addresses of six Supreme Court justices. A warning about possible violence would be warranted under those circumstances, right?

Wrong. Actually, the piece was warning about potential violence from the far-right.

CNN anchor Jim Sciutto, a Democratic hack who served in the Obama administration, told viewers on Friday, “Capitol Police are warning the far-right is calling for violence against a religious group planning to rally for abortion rights.”

Sciutto then turned to Wild, who was standing outside the Supreme Court:

“Listen, seeing fences going up over there. It’s sort of like post-Jan. 6,” Scioutto said. “What specific intelligence is worrying police officials?”

“And what we know after January 6, and what law enforcement knows across the country, is that social media chatter can manifest into actual violence. Sometimes people really do say what they’re going to do.

“Law enforcement, acutely aware of that possibility, and federal law enforcement officials held a call with about 150 participants all across the country to warn them about protests that resulted in confrontations about the possibility of future demonstrations as well as for the potential for violence.”

Wild pointed out the fence that has gone up outside the Supreme Court building.

“You’ve seen this fence many times. It is the same fence that went up around the Capitol following Januar 6. This kind of approach has become somewhat of muscle memory here in Washington following the riot…

“Jim, the bottom line here is while these protests for the most part have been … peaceful. … No physical eruptions, no real serious acts of violence here because police were able to intervene. They’re very concerned about it, MPD [Metropolitan Police Department] keeping some of those police resources at least through Sunday.”

Joe Biden says that overturning Roe v. Wade could lead to LGBT children not being allowed in school classrooms:

“This MAGA crowd is the most extreme political organization that’s existed in American history.” pic.twitter.com/WyW6j52ju0

Really? MAGA supporters are more extreme than antifa and Black Lives Matter, the groups who wreaked havoc throughout the country in the summer of 2020?

After opening the southern border, destroying U.S. energy independence, weakening our military, causing record inflation, trying to pack the Supreme Court and federalize our elections, and so much more, this unprincipled puppet of the far-left has the gall to call MAGA supporters extreme?

In her unhinged rant over the leaked draft opinion on Roe last week, Democratic Sen. Elizabeth Warren of Massachusetts told protesters in front of the Supreme Court building, “We’ve heard enough from the extremists.”

Conservative commentator Dan Bongino addressed this issue on the Thursday edition of his daily podcast. He said the new Disinformation Governance Board, aka The Ministry of Truth, was placed inside the Department of Homeland Security because it will allow DHS to exercise law enforcement power over the American people.

In a segment that begins at about the 9-minute mark of the video below, Bongino explained that Mayorkas “wants to be able to use the law enforcement powers of the Department of Homeland Security like the tyrant, thug he is … if you dare ask questions.”

“They want to unleash the national security infrastructure, just like they did on Trump, on you. But the only way to do it is going to be to tie in the ‘extremist’ label, January 6, all of that,” he said later.

About the 14:15 mark, Bongino played the clip of Biden calling MAGA supporters extremists.

“Folks, he [Biden] was told to say that,” Bongino said.

“Him labeling the MAGA movement as extremists is a very deliberate step. There is a reason the Ministry of Truth was put in the Department of Homeland Security. It was not an accident.”

About the 16:20 mark, Bongino played a clip of MSNBC host Nicole Wallace speaking to the former head of Planned Parenthood, Cecile Richards.

“I wonder your thought on [Biden’s] characterization of the Republican Party in its current incarnation as the most extreme political organization in history,” Wallace asked.

Richards replied: “Well, I certainly agree with that characterization. And I agree, Nicole, that this is a seismic shift. I don’t think any of us have ever experienced the loss of the constitutional right … ”

Bongino points out, of course, that abortion is not a constitutional right.

“They’re going to wait for the first violent act – anywhere in the country – and they’re going to find some reason, justified or not, to pin it on conservatives, this abortion ruling, and they’re going to sic the Ministry of Truth and the DHS, just like they did on anybody who showed up to exercise their constitutional rights on January 6. Whether you were in the Capitol or not, you were a target.”

But Americans who only watch CNN and MSNBC to get their news will, sadly, believe it. This is the same playbook the left has used to plant the narrative of Trump-Russia collusion, the idea that Republicans are racist and the slew of less memorable narratives that have taken hold in the past five or six years.

Early on, conservatives didn’t do enough to counter the propaganda. That’s changing. The conservative media and conservative politicians have become far more vocal in their pushback against these tactics. The right’s opposition to the indoctrination of children in public schools and its effect on the Virginia governor’s race in November is evidence of a win.

CNN’s warning about potential right-wing violence is simply the network’s contribution to the left’s collective effort to launch a new hoax on the American people.

It’s not going to work.