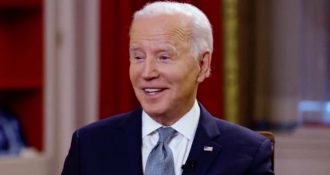 The following article, No Bias Here: Biden Hires New Press Secretary Who is in Lesbian Relationship with CNN Reporter and Hates Israel, was first published on .

The Biden administration has hired an extremist, radical, anti-Semitic, left-winger who has direct ties to CNN as his next White House press secretary. What could possibly go wrong?

As soon as Biden announced that he has appointed Karine Jean-Pierre to replace Jen “Peppermint Patty” Psaki as his press secretary, people began to realize that Jean-Pierre is supposedly married to lesbian CNN reporter Suzanne Malveaux.

Though details of Jean-Pierre’s relationship with Malveaux remain limited at this time, the two have been in a same-sex partnership and currently have an adopted daughter between them in Washington, D.C. Malveaux earned a degree in sociology at Harvard University before attending Columbia University Graduate School of Journalism. Having previously served as a White House correspondent and primary substitute for Wolf Blitzer on The Situation Room, Malveaux has also co-anchored CNN’s Around the World and editions of CNN Newsroom.

As I reported in Breaking the News, Karine Jean-Pierre is married to CNN anchor and national correspondent Suzanne Malveaux.

This is one of many examples of the corporate media LITERALLY in bed with the government it covers. https://t.co/TIfOxLywSH

Jean-Pierre’s elevation to the Biden press office raises serious ethical questions for her relationship with a member of the press.

But this isn’t the only major problem with this woman Biden is putting in a position of power in his administration. She is also a virulent hater of Jews.

Per The Foreign Desk:

Jean-Pierre’s anti-Israel past—which includes a stint as senior adviser and national spokeswoman for MoveOn.org, a far-left anti-Israel group that advocates for boycotts of the Jewish state—is raising red flags in the pro-Israel community. The selection of an Israel critic is also likely to further strain ties with the pro-Israel community and Israeli government, which already is strongly opposed to the Biden administration’s efforts to ink a new nuclear deal with Iran.

Jean-Pierre has been open about her animosity towards the Jewish state. She has accused Israel of committing “war crimes” and has backed efforts to boycott the American Israel Public Affairs Committee, the United States’ most prominent pro-Israel lobbying shop, cheering Democrats in 2019 for boycotting the group’s annual gathering in Washington, D.C., for “boldly [chose] to prioritize diplomacy and human rights over the power of a lobbying organization.” AIPAC, she claimed, helped the Trump administration “sabotage” the Iran nuclear deal and also “supported the group that’s credited with inspiring President Trump to enact the Muslim Ban and has been known to spread anti-Muslim racism.” She accused the group without evidence of trafficking in “severely racist, Islamophobic rhetoric.”

Has there ever been a single member of the Biden administration who isn’t an insane, anti-American, leftist?

We have yet to see one.

This would almost be funny if it wasn’t so pathetic. THIS is what Biden voters wanted and voted for!
They got what they wanted, the rest of us got …..!