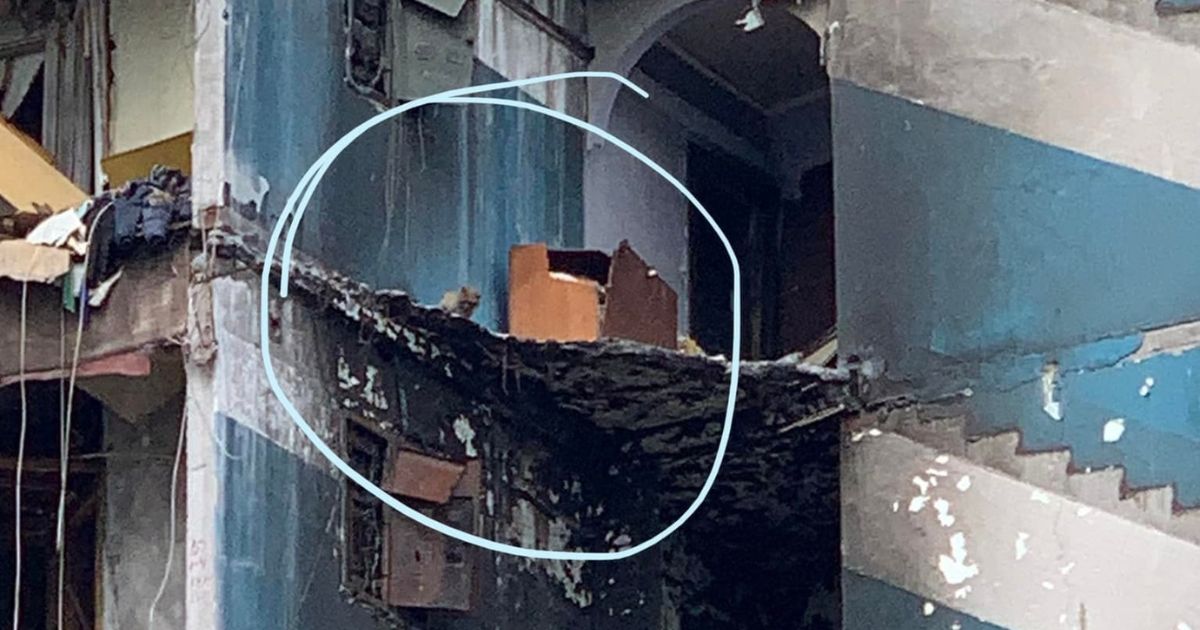 The following article, Cat Stranded for Weeks on 7th Floor of Bombed-Out Building Finally Rescued, Thanks to Local Heroes, was first published on Flag And Cross.

The internet loves cats — and that certainly worked in the favor of one particular feline who found herself condemned to death at the top of a bombed-out building in Ukraine.

Eugene Kibets has a heart for animals, especially ones that desperately need rescuing, so when he found out about a cat stranded on the seventh floor of an apartment building in Borodyanka, Kyiv, he had to do something.

According to the U.K.’s Daily Mail, the cat had already been there for weeks, somehow surviving in the shell of the building that still stood. Volunteers even used a drone to scout the area and make sure the cat was still alive before launching their rescue efforts.

The rescue would take a little more work than usual, given the extraordinary height at which the cat was located.

“UPD today we will be on site,” Kibets posted on Facebook on Sunday. “Need a car with a tow truck.”

“The cat is on the 7th floor of a non-existent house,” he said. “Woody. We have to go tomorrow at noon. Who can help with the contacts of such a car?”

So he enlisted the help of local firefighters, who agreed to help out with the rescue mission.

Using their fire engine with a crane and basket, they were able to rescue the sickly, skinny, matted cat, who was promptly taken in for emergency veterinarian care.

According to Ukrainian news outlet TSN.ua, the cat, upon seeing people there to rescue her, climbed across the debris-strewn room and into their arms.

“The real heroes of today – dsns borodianki and irpenya,” Kibets posted on Facebook after the successful endeavor. “They are super men. It was a pleasure to watch their work. You guys are awesome!!!”

Kibets’ posts and those shared by others online have gone viral, bringing the kitty internet fame and earning her a huge fan club that waits impatiently for updates.

After some R&R with the professionals, the cat has gone home to be cared for by Kibets. The vets determined she’s around 15 years old, and she has been nicknamed “Borodyanka.”

While it’s clear that Borodyanka is a brachycephalic cat breed (shortened nose and “squished” facial appearance), many have commented to suggest that the cat’s grumpy face is in response to the situation she’s been through and the treatment she’s received in Russia’s invasion of Ukraine.

“UPDATE: Eugene Kibets wants everyone to know that the cat he rescued from the destroyed building in Ukraine is doing fine,” a post from LorenzoTheCat read.

“She’s a little pissed off, but doing fine.”