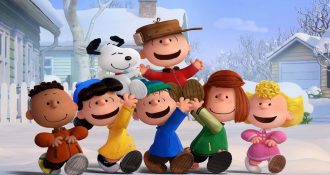 The newest cartoon based on the wonderful Peanuts characters is going woke for Mother’s Day.

The new holiday special set to air on AppleTV not only celebrates lesbian mothers, and two mother households, it also celebrates single dads.

Dads… er… don’t they have a day of their own, already… I think… isn’t it called something like “Father’s Day”?

Here is the trailer for “Snoopy Presents to Mom (and Dad), with Love”:

In the trailer, we see Peppermint Patty, created in 1973 as a late addition to the comic strip, who says that she doesn’t have a mom. But, she adds that her dad does all the mom stuff.

“My dad does all that mom stuff for me,” Peppermint Patty says. “For Mother’s Day, I’m going to celebrate my dad … There are all types of moms, right?”

But, then Marcie waxes eloquent over lesbian moms (Per The Blaze):

Marcie answers in the affirmative, saying, “Of course. Some kids can have two moms.”

“Even kids like me can have someone who acts like a mom,” Peppermint Patty adds. “And it’s all those moms who deserve to be celebrated”

A news release from Apple TV states, “While the other kids are excited to celebrate the special day, for Peppermint Patty, it’s just a reminder that she didn’t grow up with a mom. With her good friend Marcie by her side, she soon realizes that real families come in all shapes and sizes, and that Mother’s Day is an opportunity to thank that special person in your life who means the most to you. Meanwhile, Snoopy and Woodstock embark on an epic adventure to find Woodstock’s long-lost mom.

Why can’t we just have Mother’s Day? Not every single thing has to be woked.