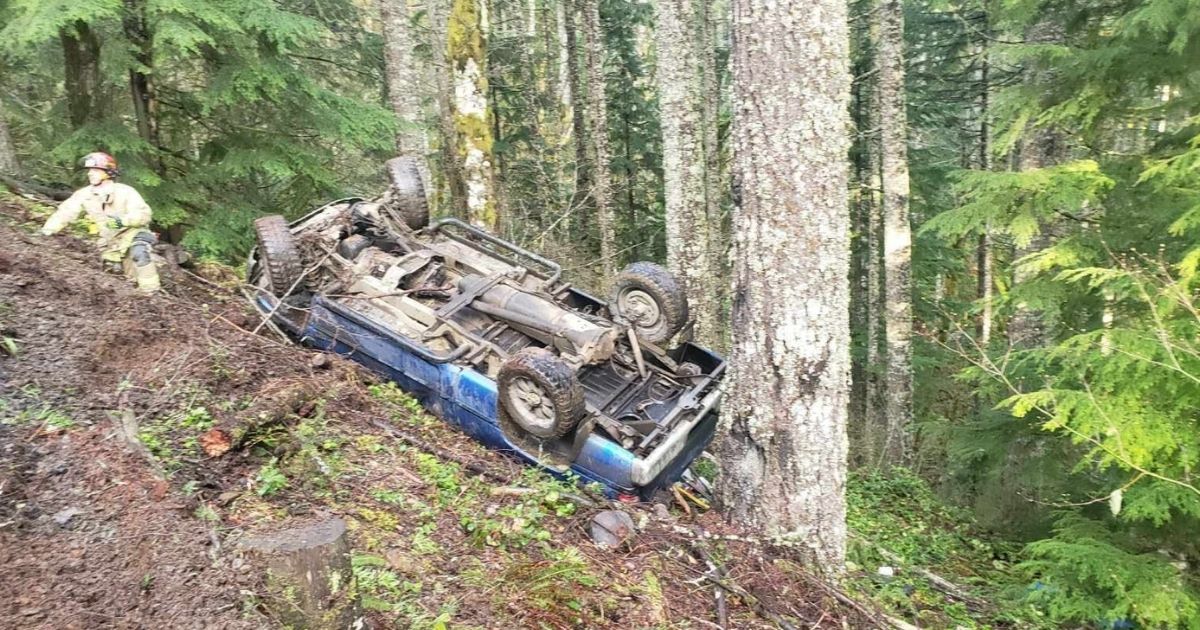 Thanks to an unnamed hero hiking in the woods near Timber, Oregon, at least one person is alive after a serious car accident.

A call came in on the morning of April 30 to report an accident in the heavily forested area near Timber. Banks Fire Crews, Washington County Sheriff’s Deputies and Metro West Ambulance set out to the general area indicated, but experienced difficulty when it came to locating the specific site.

For two hours, the dispatcher stayed on the line with the caller, and for two hours rescue crews searched in vain.

The caller couldn’t tell them exactly where they were, other than to say they’d gone off the road and into an embankment. Cell phone service was spotty at best and didn’t allow rescuers to pinpoint a specific location.

The crew also tried alternating sirens and listening for the victim to honk their car’s horn in response, but heard nothing.

Finally, a hiker appeared and became the hero, leading the emergency teams right to the accident. One person had been able to exit the vehicle on their own, but the other was in serious condition and had to be life-flighted out.

“After an extensive search led by Washington County Sheriff’s Deputies, an off-duty Banks Fire Captain came across a citizen hiking in the area who was able to direct us to the vehicle crash,” the Banks Fire District 13 Facebook page posted.

“Once our crews returned to the station they were greeted with breakfast burritos and donuts by our support crews from Jim’s Thriftway. Together we are stronger!”

“In this case there two different carriers involved, one of the big three and one reseller,” he wrote in the comments on the fire district’s post.

“We were only able to ‘ping’ one of the phones (the one from one of the big three) and it was not able to respond with its own gps info. Neither of the phones were able to hit more than one tower which is necessary to give a good triangulation. The best location we had from the phones was what tower they were hitting, and in the coast range that can be very misleading.

“Lesson learned: you can’t always count on your cell phone to provide accurate location information, always know where you are!”

Authorities used the incident as a reminder to people who spend any time in rural areas to make sure they are prepared, both by knowing where they are and by having supplies on hand to help in case of an emergency.

“If you are going to be travelling in remote areas we recommend that you be prepared for the environmental conditions, be ready to stay overnight in an emergency (with enough clothing, blankets, food and water), keep your cell phone fully charged/have a charger, and be aware of your location,” the post continued.

Adams also said that instead of relying on a cell phone, those who venture deep into nature should have a “PLB (Personal Locator Beacon), or an advanced version like the SPOT or INReach.”

The fire district also recognized the work of their dispatcher.

“Spending that much time on the phone with the caller, keeping them calm, helping them to help us locate them,” they wrote, “the Dispatchers went WAY above and beyond on this one.”