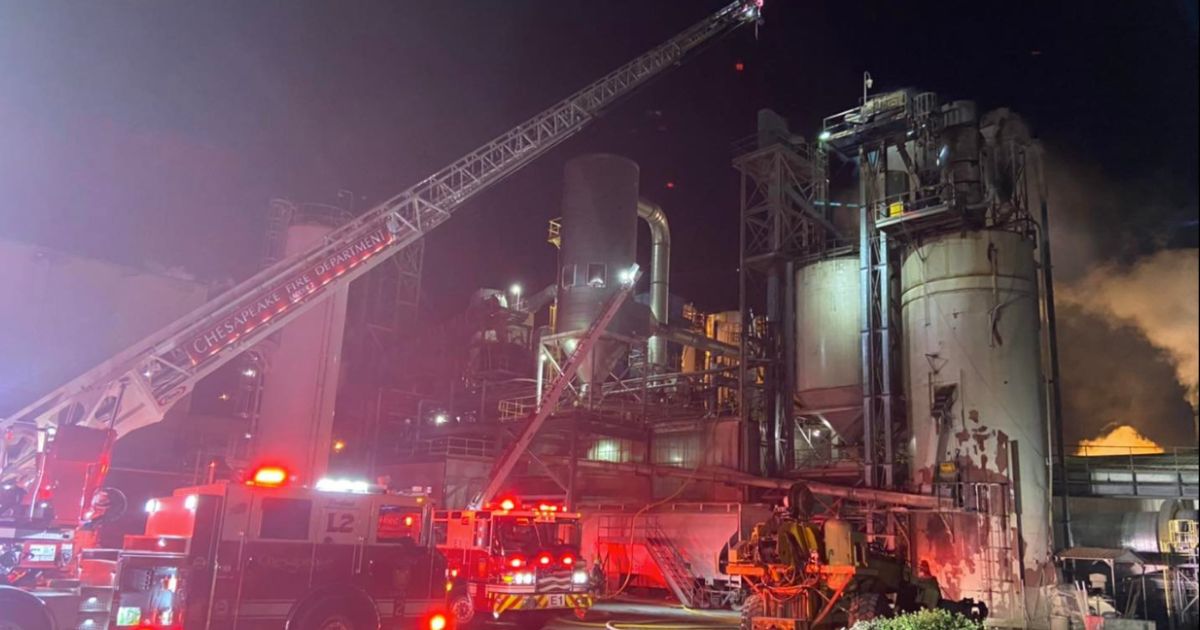 The following article, Another Food Processing Plant Catches Fire Amid Bizarre String of Incidents Across US, was first published on Flag And Cross.

All this comes at a time when experts are talking about global food shortages as the nasty surprise in store for the world in 2022.

No one was injured in the fire at a Perdue soybean plant in Norfolk, Virginia, according to WAVY-TV, and the cause had not yet been determined.

“Chesapeake firefighters battled an industrial fire this evening at Perdue Farms in the South Norfolk area,” The Chesapeake Fire Department posted on its Facebook page.

“Plant operators reported a fire in large soybean processing tank. Firefighters climbed multiple flights of stairs with hose and equipment to access the standpipe system. Water was applied and the fire brought under control in approximately one hour,” the post read.

The tank was cleared of all soybeans.

On Sunday night, fire broke out at a Saladino’s food processing plant in Fresno, California, according to KFSN-TV.

No information was available on the cause of that fire.

Although authorities have found no obvious links among the incidents, a number of food processing plants have been damaged in some rather strange incidents.

Here is a picture of Food Processing Plants that have had ‘Accidents’/‘Burned Down’ that we’re not allowed to talk about: pic.twitter.com/TO8rSsT3lO

During his April 22 broadcast, Fox News host Tucker Carlson remarked on the odd series of food processing plant disasters that have befallen facilities all across the nation and noted the oddity that two of these plants were hit by falling airplanes in the same week.

“A plane apparently crashed at a General Mills plant … in Covington, Georgia. Six tractor-trailers were reportedly on fire … This is the second time in a week that something like this has happened,” Tucker told his audience.

“On April 14, a plane crashed into the Gem State processing plant in east Idaho. What’s going on here?” Tucker asked. “Well, the story gets weirder. Food processing plants all over the country seem to be catching fire,” he said.

Seattle radio host Jason Rantz joined Carlson to give his perspective on the incidents.

“When you’ve got well over a dozen food processing plants and warehouses getting destroyed or seriously damaged over just the last few weeks, at a time when the food supply is already vulnerable, it’s obviously suspicious, and it could lead to serious food shortages,” he said.

Rantz also said the worry exists that these incidents are “an intentional way to disrupt the food supply.”

As we have been calling out here for the past sixty days. There’s going to be a huge global food shortage this fall. China is moving to shore up its needs, but the US has not stepped in to manage its own food supply. Africa and parts of the s. hemisphere are going to be a mess. https://t.co/1KI5zgxZDb

David Beasley, who heads the United Nations’ food agency, has said the world faces the potential of mass food shortages due to the war in Ukraine, according to the Associated Press.

“If we end the conflict, address the needs, we can avoid famine, destabilization of nations and mass migration,” he said. “But if we don’t, the world will pay a mighty price and the last thing we want to do as the World Food Program is taking food from hungry children to give to starving children.”

Continue reading: Another Food Processing Plant Catches Fire Amid Bizarre String of Incidents Across US ...