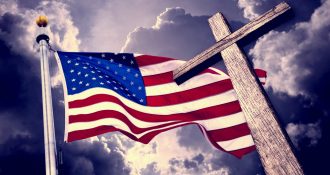 The following article, Supreme Court Rules Against City of Boston for Excluding Christian Flag from City Hall, was first published on .

The U.S. Supreme Court ruled unanimously on Monday saying that it was unconstitutional for the city of Boston to ban a Christian group from partaking in a community flag raising program at City Hall.

The city had rejected Camp Constitution’s flag application because the group’s flag had a Christian theme and the city said allowing the group to join the flag raising program would violate the separation of church and state.

Boston has a program that allows community groups to fly their flag over city hall for a set period of time as a way to raise awareness of their cause, group, or charity. But the city denied Camp Constitution’s flag solely because it was a “Christian flag.”

The city claimed that if it allowed the flag to be flown, it would essentially be engaging in “government speech” favoring Christianity. But the US Supreme Court rejected that argument.

“We conclude that, on balance, Boston did not make the raising and flying of private groups’ flags a form of government speech,” wrote Justice Stephen Breyer in the court’s Shurtleff v. City of Boston opinion.

Further, since the SCOTUS ruled that the city was not instituting a state religion merely by allowing the Christian group to fly their flag, their rejection of the group’s application violated the group’s freedom of speech.

“Here, Boston concedes, the decision states, “that it denied [Harold] Shurtleff’s request solely because the Christian flag he asked to raise ‘promot[ed] a specific religion’ … Under our precedents, and in view of our government-speech holding here, that refusal discriminated based on religious viewpoint and violated the Free Speech Clause.”

The Christian group noted that the city allowed more than 300 flags to be flown as part of the program, including, Turkish flag, the Vatican flag, the Communist Chinese flag, the transgender flag, LGBT flags, and more. And that the Christian-themed flag was the only application that the city ever rejected.

Justice Gorsuch asked, “How did the city get it so wrong?” And Justice Kavanaugh added, “Under the Constitution, a government may not treat religious persons, religious organizations, or religious speech as second-class.

Mat Staver, the Founder and Chairman of Liberty Counsel, the religious liberty law firm that represented Shurtleff, said in a statement, “This case is so much more significant than a flag. Boston openly discriminated against viewpoints it disfavored when it opened the flagpoles to all applicants and then excluded Christian viewpoints. Government cannot censor religious viewpoints under the guise of government speech.”