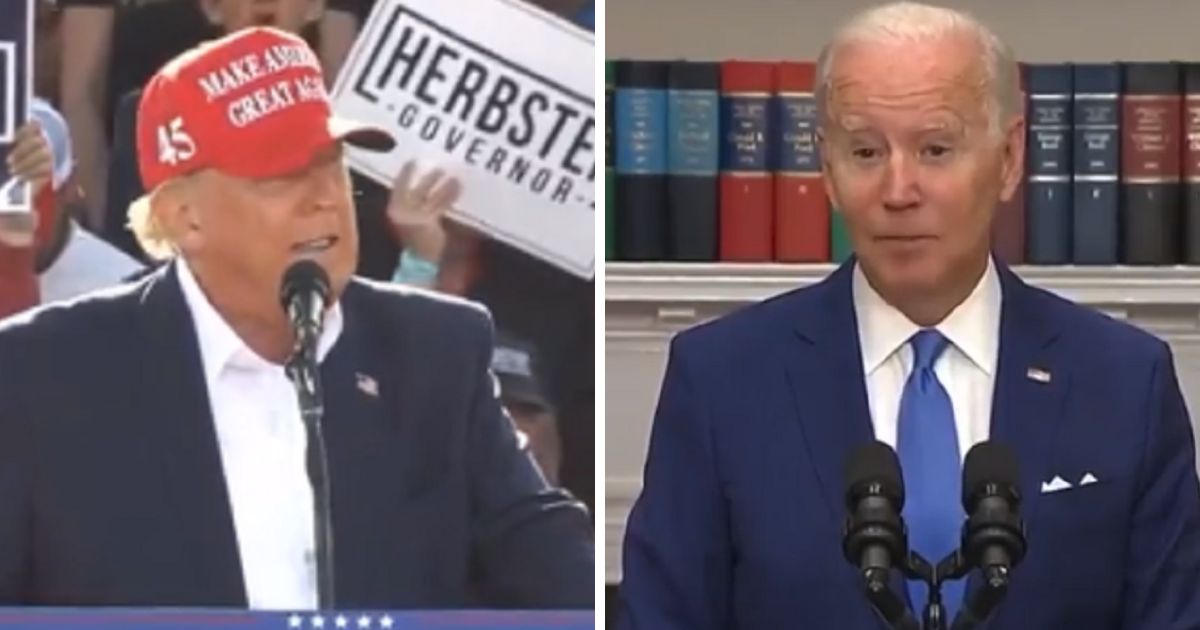 Serious question: If leftists want to get into a fight with conservatives over whether President Joe Biden or former President Donald Trump is exhibiting more evidence of senility, do they think this will work out well for them?

Apparently so. On Saturday, at a rally in Nebraska, Trump mixed up the name of the candidate he endorsed for Senate in Ohio, J.D. Vance. Instead, he called him “J.D. Mandel,” confusing the candidate’s last name with the last name of his closest challenger, Josh Mandel. Whoops.

Articles were written. #DementiaDon trended on social media. To progressive Twitterati, it was like the gaffe of the century.

In the meantime, just two days before “J.D. Mandel,” Biden exhibited a cognitive breakdown so significant during a speech at the White House that it was difficult to parse what he meant during 30 seconds of straight gibberish — even after the official transcript-makers played around with his words in the published version.

(Here at The Western Journal, we’ve been documenting Joe Biden’s unusual and problematic gaffes since the beginning of his campaign — even while mainstream media outlets were ignoring them. We’ll continue to raise the grave concerns about the president’s mental state that CNN or The New York Times won’t. You can help us by subscribing.)

So, in case you missed it, here it is: #DementiaDon in action:

There’s liberal Twitterer @Acyn, aghast at this error when the self-described “internet hooligan” can’t spell “Mandel” correctly. (Can we get #DementiaAcyn to trend? No alliteration there, alas.)

But that’s not all! Did you realize Trump accidentally mispronounced Mitt Romney’s name before correcting himself?

While everyone is focused on “JD Mandel”, Trump was also unable to pronounce Mitt Romney’s name properly.

— Republicans against Trumpism (@RpsAgainstTrump) May 2, 2022

So, look what trended:

#DementiaDon is trending because Trump mashed up the names of the candidates he is endorsing. We warned years ago that Trump shows clinical signs of advanced dementia. Please read: https://t.co/kfi6oJP1Ez

It’s not JD Mandel. It’s not JP Mandel. It’s not Yo Semite.
Trump’s cognitive disorder is getting worse. It’s hereditary & Fred Trump had it. Whether it’s #DementiaDon or just #StupidTrump, he’s still a criminal who tried to overthrow the government. https://t.co/ceDFWJ6PLs

It’s not just the hashtag brigade, either; Business Insider, among other publications, dedicated a whole story to the gaffe.

“Prior to Trump’s ‘JD Mandel’ comment, the former president said he ‘aced’ a cognitive test, a claim he has repeated recently, and said President Joe Biden should take one,” Insider’s Kelsey Vlamis acidly noted.

Therein lies the problem with focusing on “J.D. Mandel” (or “JD Mandell,” should you lack sufficient familiarity about what you’re mocking) and pitting Trump’s gaffes against Joe Biden’s.

On Thursday, Biden made remarks from the White House regarding the package of aid for Ukraine the White House has sent to Congress. In addition to the aid, the legislation would allow the United States to seize more assets from Russian oligarchs.

I know this because I read up on the legislation. The president, however, wasn’t of much help in the area.

See what you can glean from this:

Here’s the official White House transcript of those remarks. The strike-through and bracketed words are in the transcript:

“In addition to this supplemental funding, I’m also sending to Congress a comprehensive package of — that will enhance our underlying effort to [hold accountable] the Russian oligarchs and make sure we take their — take their ill-begotten gains,” it read.

“Ha, we’re going to ‘accommodate’ them. We’re going to seize their yachts, their luxury homes, and other ill-begotten gains of Putin’s kleptoc- — yeah — kleptocracy and klep- — the guys who are the kleptocracies. (Laughs.)”

After several attempts to pronounce “kleptocracy,” he got it. Whoo-hoo. He couldn’t get “kleptocrats,” instead settling for “the guys who are the kleptocracies” before emitting a forced laugh that wouldn’t have been out-of-place from a villain on the 1960s TV adaptation of “Batman.”

He couldn’t get “hold accountable,” however, and instead went for “accommodate,” which is pretty much exactly the opposite in this context.

This is the president of the United States speaking about new measures aimed at the Russian oligarchs who buttress Kremlin strongman Vladimir Putin, the Russian president who has brought the world closer to nuclear war than any time since the fall of the Soviet Union. But look, everyone! Big orange man who eats a lot of McDonald’s mixed up the names of J.D. Vance and Josh Mandel! That’s the ticket.

While they’re not covered with the same breathless intensity that they received during his two campaigns for the presidency, Trump is still giving frequent campaign-style rallies at which he speaks volubly, at length and with some degree of extemporaneousness. That’s not the behavior of the cognitively impaired.

Biden, meanwhile, delivers brief remarks when he has to, usually off of a script that’s presumably been quadruply vetted by his handlers, and still manages to mangle his material regularly.

Yet, “J.D. Mandel” sparked a round of #DementiaDon hashtagging from people who don’t seem particularly concerned about the mental state of this man:

Confused President Biden: “What do we do now?” and what sounds like “do we leave?” after remarks on his administrations trucking action plan, alongside Secretary of Transportation Pete Buttigieg.

JOE BIDEN: “I’m deeply proud of the work [Jill is] doing as first lady with Joining Forces initiative she started with Michelle Obama when she was vice president” pic.twitter.com/wO12WPQ56I

Is this really the battle you want to pick, left-bubble Twitter?

However, his suggestion that President Biden take one still stands as eminently reasonable in our book, particularly given the mountain of evidence something isn’t quite right with the current commander in chief.