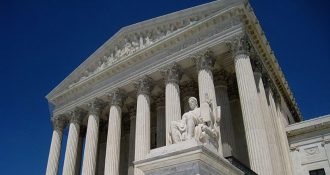 According to leaked reports, the U.S. Supreme Court is set to overturn landmark abortion ruling Roe v. Wade, but the decision has been leaked by leftists in an attempt to intimidate the Justices to change their minds ahead of the final issuance of the ruling.

A blockbuster report published Monday evening by Politico says that the majority opinion written by Justice Samuel Alito says, “We hold that Roe and Casey must be overruled.”

“It is time to heed the Constitution and return the issue of abortion to the people’s elected representatives,” the decision continues, Politico added.

Alito added, “Roe was egregiously wrong from the start. Its reasoning was exceptionally weak, and the decision has had damaging consequences. And far from bringing about a national settlement of the abortion issue, Roe and Casey have enflamed debate and deepened division.”

At the least, the Alito was joined in the ruling by Clarence Thomas, Neil Gorsuch, Brett Kavanaugh and Amy Coney Barrett. Presumably Chief Justice Roberts, and Justices Breyer, Kagan, and Sotomayor opposed the ruling.

But this decision has not been formally released, so it is not official yet.

This means that someone inside the court has leaked this decision. So, one of the court’s 45 employees — 9 justices and their staffs and clerks — have gone against 200 years of tradition to leak a major decision ahead of the release of a major decision.

And there is only ONE reason this was leaked. The leaker hopes to get the screeching, woke left to rise up and intimidate some of the justices into changing their votes and fleeing the majority.

Since this decision has not been officially released, the decision is not set in stone. A justice can change his mind all the way until a decision is released. That is what the left hopes to do with this leak. Scare at least one judge into leaving the majority and joining the other side to oppose the ruling.

This leak represents the biggest breach of security in the history of the court.

Any leftist that praises the “brave leaker” is endorsing an insurgency against the nation’s highest court.