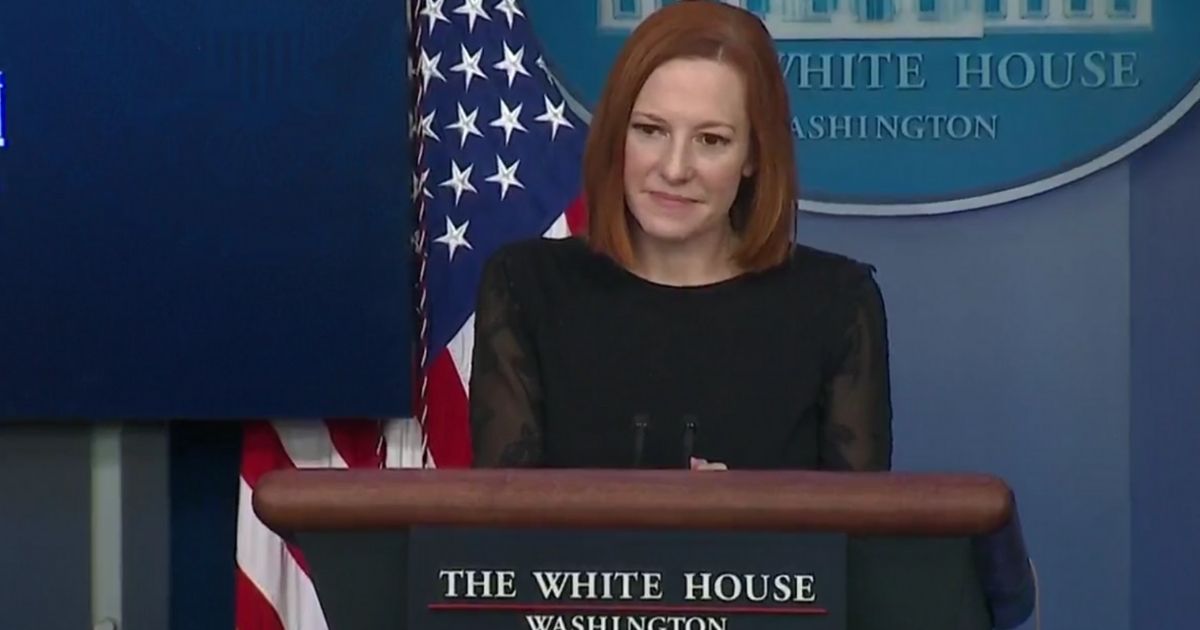 The following article, Psaki Deflects on Disinformation Board Question, Claims It All Started in the Trump Years, was first published on Flag And Cross.

White House press secretary Jen Psaki insisted Friday that what Biden administration’s Homeland Security secretary said last week was a new effort from his agency was in fact a continuation of Trump-era efforts.

Last week, Homeland Security Secretary Alejandro Mayorkas revealed the existence of the Disinformation Governance Board with no references to the Trump administration, according to The Washington Post.

“We have just established a mis- and disinformation governance board in the Department of Homeland Security to more effectively combat this threat, not only to election security but to our homeland security,” he said.

However, as outrage built with critics likening the new unit to the “Ministry of Truth” in the George Orwell novel “Nineteen Eighty-Four,” Psaki said it was all started by former President Donald Trump.

“This is a continuation of work that began at the Department of Homeland Security in 2020 under former President Trump,” she said at one point of Friday’s briefing without giving specifics.

“So for anyone who’s critical of it, I didn’t hear them being critical of the work under the former President, which is just interesting to note contextually,” she said.

Fox’s Jacqui Heinrich pushes Jen Psaki to explain what this “Disinformation Governance Board” is up to, and Psaki offers nebulous baloney, like this is somehow a continuation of the Trump administration?https://t.co/8LR2GmXBHu

Psaki also danced around a question from Jacqui Heinrich of Fox News, who asked about  Nina Jankowicz, the woman appointed to head the new board and who has attacked efforts to spread the revelations contained in Hunter Biden’s laptop.

“Yesterday, you had told me that you were not familiar with Nina Jankowicz.  I’m wondering if you’re — if you have more information on her today,” Heinrich asked.

Psaki then recited bits of Jankowicz’s biography, noting that she was an “expert on online disinformation.” She said the hiring of Jankowicz was a Department of Homeland Security matter.

Psaksi also claimed the new board was involved in “ongoing work, back to the former administration — on — to address how and understand how misinformation is spread by human smugglers that prey on vulnerable populations attempting to migrate to the United States.”

“So — and this is also work that is helping to address unauthorized — terrorism, other threats, and see how disinformation and misinformation is being pushed to lead — to increase those.  So that’s all work — we think it’s work that’s been ongoing for some time,” she said.

Psaki (AKA Peppermint Patty)
Said that the Disinformation section of DHS was started by former POTUS Trump…that’s what she said during a press conference…I would love a fact check on THAT. The Left would have screamed “faaacist pig”.

Psaki Blames Trump for the Disinformation Governance Board – PJ Media

Lara Trump, the daughter-in-law of the former president and a Fox News contributor, noted that if even a whiff of such a group existed in the Trump administration, there would have been howls of outrage.

“I can’t even imagine the number of heads that would have exploded simultaneously today if something like that would have happened. Obviously, this whole thing is very concerning,” she said on Fox & Friends First.

“If you care about the United States of America and our First Amendment rights, our freedoms of speech, this is such a concerning spot to find ourselves in, in America. I actually remember reading ‘Nineteen Eighty-Four,’ George Orwell’s book, and thinking to myself about the Ministry of Truth.

“What an awful thing that would be to have happen to any society.”

Continue reading: Psaki Deflects on Disinformation Board Question, Claims It All Started in the Trump Years ...