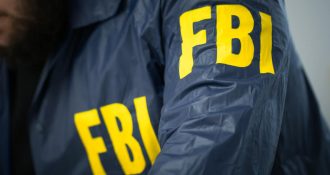 The following article, Biden’s Corrupt FBI Has Tripled Unconstitutional Searches of Americans, was first published on .

The Office of the Director of National Intelligence (ODNI) reported that warrantless searches conducted under Section 702 of the Foreign Intelligence Surveillance Act (FISA) nearly tripled from 2020 to 2021.

As Big League Politics noted, “a senior FBI official admitted to the Wall Street Journal that the 3.4 million warrantless searches ‘is certainly a large number,’ adding that he would ‘not going to pretend that it isn’t.'”

INBOX: FBI warrantless searches of Americans' data more than doubled from 2020 to 2021, ODNI report. The FBI collected data from nearly 3.4 million Americans in 2021, more than double the over 1.3 million in 2020, Just the News reported.

“For reasons discussed more fully below, these statistics are reported separately from NSA, CIA, and NCTC due to unique variations in FBI’s data, chief among them that FBI does not count the number of unique query terms, but instead counts the total number of queries, which could include duplicate queries of the same term,” the report noted.

Sen. Ron Wyden (D-OR) was shocked by the numbers and wanted more transparency.

“For anyone outside the U.S. government, the astronomical number of FBI searches of Americans’ communications is either highly alarming or entirely meaningless,” Wyden said. “Somewhere in all that over-counting are real numbers of FBI searches, for content and for non-content – numbers that Congress and the American people need before Section 702 is reauthorized.”

“The FBI must also be transparent about the particular circumstances in which it conducted a staggering 1.9 million additional queries in 2021. Finally, the public deserves to know whether the FBI has fully addressed the extensive abuses of its 702 search authorities that have been documented for years. Baseline transparency is essential if the federal government wants to hold such sweeping surveillance powers,” Wyden added.

This should not be a surprise. The FBI stopped being a top law enforcement agency a decade ago when Barack Obama corrupted the agency by eliminating all its top leaders and replaced them with extremist, left-wing ideologues.

The FBI is a branch of the Democrat Party. It is not a “law enforcement” agency.