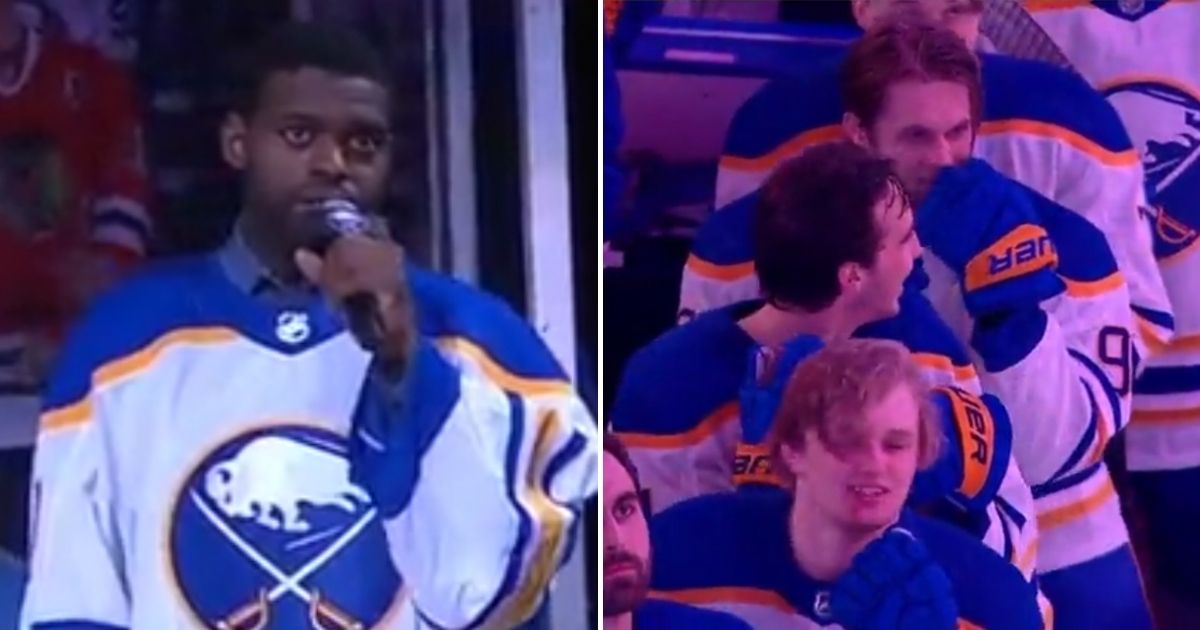 The following article, NHL Goalie Grabs the Mic and Stuns Teammates and Fans with ‘Unreal’ National Anthem Performance, was first published on Flag And Cross.

The Buffalo Sabres closed out their regular season Friday with a performance few fans will forget.

No, not the 3-2 win in overtime over the Chicago Blackhawks that gave a team that missed the playoffs something upbeat to think about before they watched the playoffs from home.

Injured goalie Malcolm Subban took the mic and sang an inspired and awesome version of the National Anthem, according to Yahoo Sports.

Players on both teams clearly enjoyed the performance, as did his brother, P.K. Subban, who plays for the New Jersey Devils.

Tage Thompson: “It was unreal. We hear him sing in the locker room, so we’ve been pushing for that for a long time. I know he was pretty nervous but that hyped everybody up for the game. I know the crowd loved it and the guy killed it. He’s got some good pipes.”

Casey Mittelstadt on Malcolm Subban’s performance: “At first, I heard he was going to record it, so I was pretty impressed when he stepped up and did it live. And I don’t have the balls to do that. That was extremely impressive. … He’s good! I did not expect that.” https://t.co/f8RMDBerDg

The league also shared the moment for everyone to see — and hear.

The reactions are priceless. pic.twitter.com/cYEOfE7bdw

Subban, 28, has not played since January after suffering an injury.

Not only did Subban perform in from of his hometown fans, he also sang in from of those Blackhawks who were in teammates from 2019 to 2021 when he played for Chicago.

Former teammate Adam Shaw, in a tweet, light-heartedly shared credit for the performance.

“oh man all those sing offs in the locker room in chi town paid off!! @Subbz3r0 gréât job bud!” he tweeted.

Shaw was asked if he ever sang the anthem.

“In the shower only, the acoustics help,” he replied.