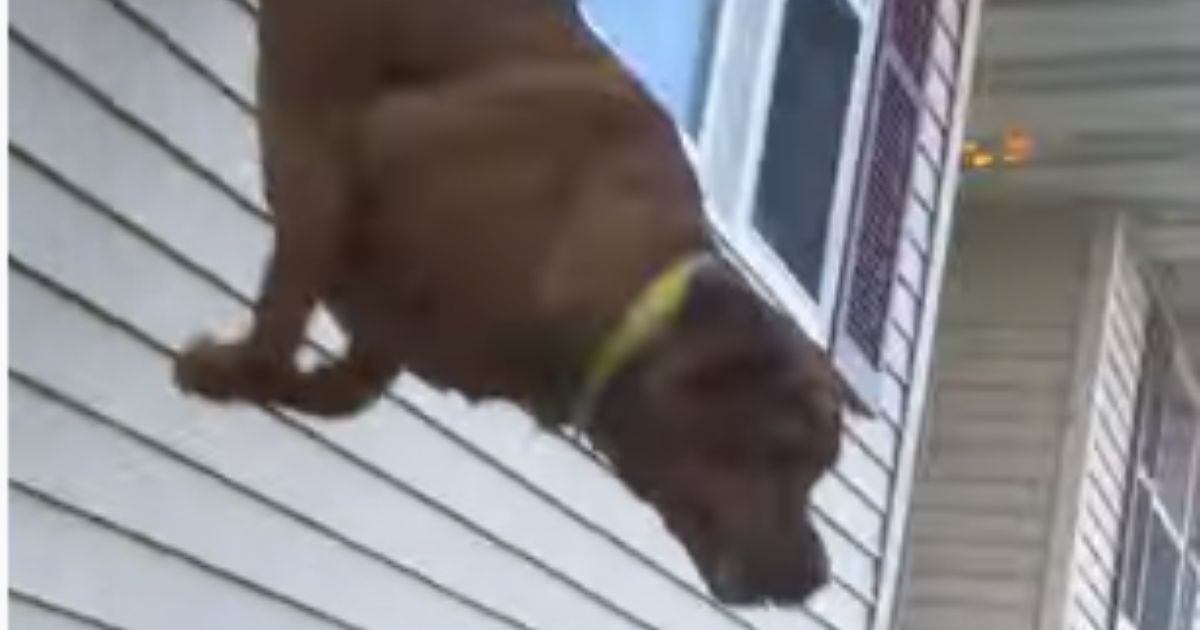 The following article, Dog Stuck on 2nd Floor of Burning Home Makes Desperate Attempt to Escape as Flames Close In, was first published on Flag And Cross.

Justin Steinmetz was on his way to work Wednesday morning, passing through Berks County, Pennsylvania, when he saw a house on fire.

Steinmetz, being a good Samaritan, stopped his car and ran to the house, banging on the door and trying to alert the inhabitants — but the parents were at work, and the kids were at school.

However, two dogs and two cats were in the burning building.

Getting no response at the house, Steinmetz quickly alerted neighbors, directed someone to call 911, and attempted to fight the blaze with a garden hose, according to WCAU-TV.

The hose was no match for the flames, which were whipped into a frenzy by high winds. As more people showed up and first responders arrived, they realized a large dog was at a second-story window, trapped.

Apparently, the two cats and smaller dog managed to get to the front door safely and exit the house, but the large dog, Charlie, was unable to pass the gate set up at the top of the stairs.

Video of the rescue shows the dog yelping and struggling to get through the second-story window. Thankfully he was able to break through the screen, and he jumped to the ground.

It’s a tough video to watch, as Charlie clearly suffered burns, is emitting smoke and is in obvious pain as he exits the house, but it’s a miracle that the dog, known as a “couch potato,” made the leap and didn’t turn and disappear back into the house.

“He had a mouth full of smoke, lungs full of smoke, and he jumped to safety,” Steinmetz said, according to WCAU. “He jumped when he needed to; that’s what matters.”

Charlie was taken to the vet, where he received treatment for his injuries. An update video shows him wearing a cone while getting oxygen, several areas on his back shaved to help treat the burns — but he’s alive.

A local shared a photo of Charlie on WCAU’s Facebook video to let people know he was headed home to continue treatment.

The family lost all their possessions in the fire, which started due to faulty electrical work upstairs, according to a page set up for the them by a family friend. A fundraiser has been set up for the family, as they are having to rebuild their lives. WCAU had no official word on the cause of the fire.

Thanks to Steinmetz and the other local good Samaritans who responded so quickly to the fire, their pets are alive and recovering.

“I don’t want to be a hero or claim to be a hero,” Steinmetz said. “I feel blessed that the animals got out alive. That’s the big thing.”