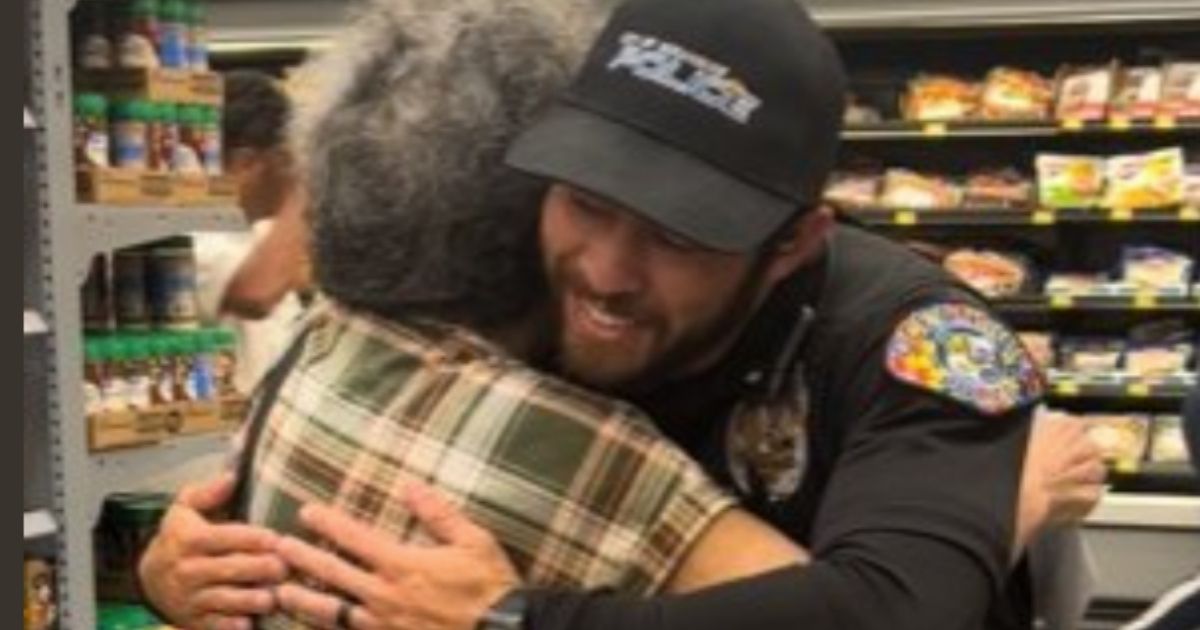 The following article, Officers Stop Unsuspecting Shoppers Inside Grocery Store, Then Hand Them a Gift, was first published on Flag And Cross.

Being approached by a police officer can be intimidating, even when you haven’t done anything wrong. Many police departments have been working on their community presence by participating in local events that highlight the humanity of their officers.

Some departments focus on holiday outreach — including “pulling over” drivers and handing them frozen turkeys or cash instead of a ticket, though that sort of interaction can still spark momentary fear in the drivers before they realize what’s going on.

The Oceanside Police Department in California has taken a lower-key approach to that giving spirit, choosing to focus recent efforts on shoppers in grocery stores rather than drivers on the road.

“Most of the time when people call the police, it’s not under the greatest circumstances,” Jennifer Atenza, the department’s public information officer, told WMTV. “It’s when something bad has happened, there’s an emergency, there’s trauma involved. So, this affords us the opportunity to make connections under positive circumstances.”

It’s great timing since the price of staples has increased dramatically, leaving people in difficult financial straits even more strapped for cash.

“Grocery costs have skyrocketed and Oceanside police officers are heading out to stores to help people overcome food insecurity,” the Oceanside Police Department posted on Facebook on April 19. “OPD will surprise shoppers with Random Acts of Kindness by helping with the grocery tab in April.”

It’s part of a Random Acts of Kindness initiative made possible by a generous $20,000 donation from the Fortin family, who founded the Trauma Intervention Programs, Inc.

“My family and I enthusiastically support the Oceanside Police Department Acts of Kindness Project,” founder Wayne Fortin said, according to the City of Oceanside.

“We can think of no better way for us to provide acts of kindness to Oceanside residents than by partnering with Oceanside police officers who are on the front lines and encounter those who need kindness and a helping hand on a regular basis.”

Each month, the department is implementing a different act of kindness, and April’s is to go out to local grocery stores and surprise customers with $100 bills.

“It’s a cool experience to get out in the community and make people smile and serve in a different way,” Oceanside Police Officer Andy Gularte said, according to Fox News.

“So, how much money do you think you’re going to spend today?” Officer T.J. Dunn asked shopper Sandy Hughes before handing her some cash, according to WMTV.

“More than I want to!” she replied.

The gift was especially useful for Hughes, who was forced to move because of the increase in rent prices.

Multiple officers have been involved in the outreach, and they’ve made a positive impact on the locals. It’s difficult to tell who enjoys the gesture more — the officers or the recipients, but it’s certainly a win/win situation and something the officers will be continuing through the end of the month.