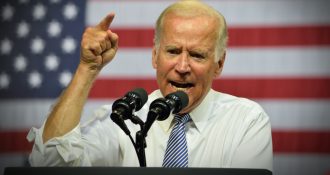 The Biden regime is suddenly setting up its own Ministry of Truth with a new “Disinformation Governance Board” in an attempt to combat “misinformation” online.

It is no coincidence that this un-American move was made in the wake of the agreement between Elon Musk and social media giant Twitter.

Biden picked Nina Jankowicz, a fellow at the extremist, left-wing the Wilson Center, to head up this absurdity.

Perhaps unsurprisingly, Jankowicz has been at the forefront as a denier of Hunter Biden’s laptop, has been a Russia conspiracy hoaxer, has repeatedly denied that conservatives have been censored online, and was up to her ears in corruption in Ukraine as an advisor there funded by the Clintons.

Back on the "laptop from hell," apparently- Biden notes 50 former natsec officials and 5 former CIA heads that believe the laptop is a Russian influence op.

By all means, let’s regulate social media. But let’s do it with proper thought and consultation, with the nation’s best interests at heart, not with the sweep of a sharpie in response to a specter of “political censorship” that doesn’t exist https://t.co/pahJMEI5x4

She also claimed that armed Trump supporters would storm the polls in 2020 to prevent Democrats from voting:

Here is Biden's new Disinformation Commissar claiming militarized Trump supporters were going to show up to the polls with weapons https://t.co/DirpRZwpBt

Finally, during testimony before the House Select Committee on Intelligence in October of 2020, Jankowicz suggested that the government needs to enforce censorship of Americans online.