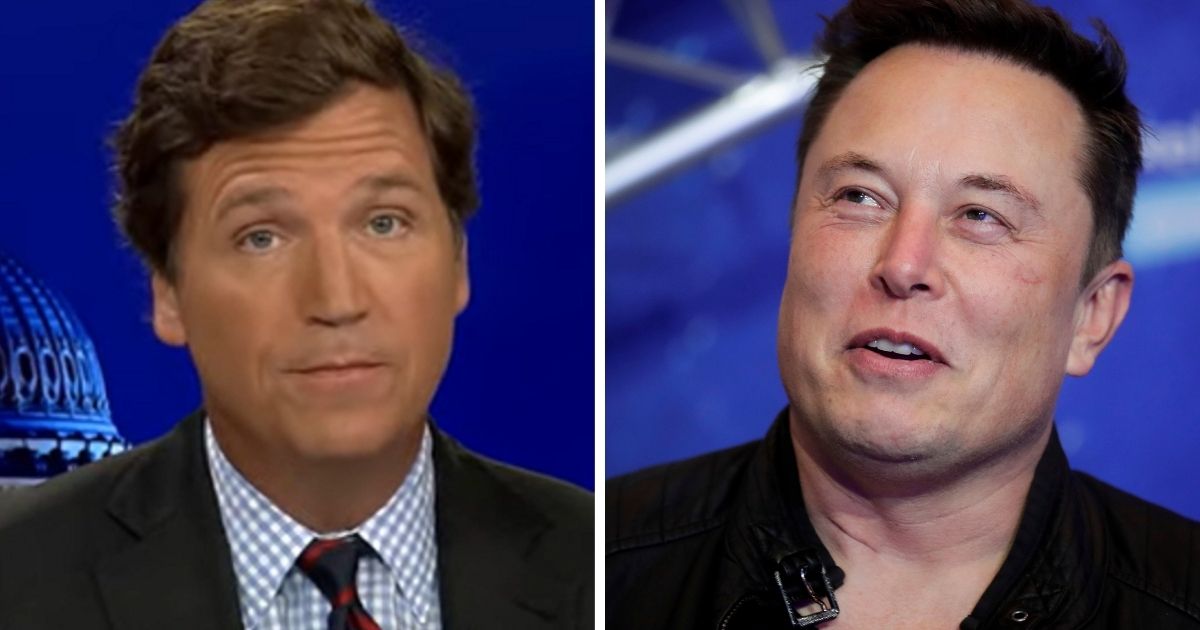 The following article, Tucker Carlson Trolls the Left Over Musk’s Purchase of Twitter – And It’s Glorious, was first published on Flag And Cross.

Fox New host Tucker Carlson sees Elon Musk’s purchase of Twitter as the “single biggest political development” since the election of former President Donald Trump. And he used some masterful trolling to make his point.

During his Monday night opening monologue, Carlson played a clip of what he at first said was the scene inside the company’s headquarters when the announcement of the deal was made.

After showing viewers footage of defeated Hillary Clinton supporters on election night 2016 instead, Carlson quipped, “Sorry, wrong tape.” Then he got serious.

“What you just saw was the collective grief of people who thought they were going to be fully in charge. Who totally believed they’d be able to rule without limit. You’re watching those people learn that actually, other people get to talk too. And that realization is crushing to them. It’s the one thing they fear and that tells you everything about why those people should never be near power.”

“People who want a monopoly on speech and thought hate Elon Musk. … They can’t control him.”

He played a clip of Musk telling an interviewer that “having a public platform that is maximally trusted and broadly inclusive is extremely important to the future of civilization.”

If viewers are trying to determine who the tyrants are, Carlson said, “they are anyone who’s bothered by the idea that other people might get to talk. And tonight, the tyrants are grieving.”

Grieving — and posting snarking tweets, like these from two Democratic congresswomen:

If you can buy a major social media platform, you can pay your fair share in taxes.

Ladies, Musk is paying more than his fair share.

Forced to exercise stock options that were expiring, according to CNBC, Musk wrote in a Twitter post in December that he would be paying $11 billion in taxes.

For those wondering, I will pay over $11 billion in taxes this year

Carlson played a clip from journalist Anand Giridharadas, who appeared as a guest on the Monday edition of Joy Reid’s MSNBC show.

“And Elon Musk is the fox coming into the hen house. And it is shameful that Twitter, which has a fiduciary obligation, I would think, to protect people who actually use it … Did they ask a single woman? …

“Was a single woman consulted? Was a single person of color who just uses Twitter, who made the mistake of using Twitter and needs it for their job. … ”

That’s just too nuts to even argue with.

Conservative actor James Woods responded to the news of the Musk purchase in his trademark style.

As @elonmusk liberates Twitter from the Thought Police, the loonies start “moving to Canada” yet again… pic.twitter.com/jhVbuYmb9X

The left’s remarkable meltdown over the idea that a self-described “free speech absolutist” is buying a social media platform that has been dominated by the left for too long is nothing short of extraordinary. They’ve grown accustomed to the one-way street they’ve enjoyed for so long.

That’s why in Carson’s monologue, he acknowledged that Musk is an “eccentric billionaire” who can’t be predicted, but said the ramifications of his Twitter takeover will be huge:

“So, in the case of Elon Musk, we will see how this turns out. But for now, Musk’s purchase of Twitter is the single biggest political development since Donald Trump’s election in 2016. It is certainly the most threatening challenge to the corrupt and incompetent leadership of this country.”

The Musk-Twitter deal should go a long way toward leveling what many of us consider to be a “rigged” playing field.

Leftists knows they can’t win the game if they’re not allowed to cheat. Hence the collective outrage.