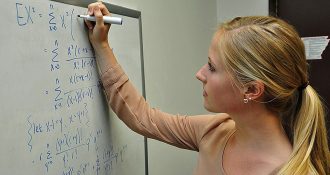 Everything silly and stupid seems to start among our feckless system of higher “education,” and now the leftists infesting our schools are saying that the white boards used in meetings and at schools are “white supremacist.”

The study published in Physical Review Physics Education Research ridiculously claimed that whiteboards are part of the “whiteness” ingrained in academia.

These loons added, that “whiteboards display written information for public consumption; they draw attention to themselves and in this case support the centering of an abstract representation and the person standing next to it, presenting.”

“They collaborate with white organizational culture, where ideas and experiences gain value (become more central) when written down,” they continued.

These racists went on to add, “invisible nature of whiteness is a primary means through which white dominance goes unchallenged” and noted that “making whiteness visible is one way to disrupt white dominance.”

Whiteness, according to the study, “does not require actors be white in order to participate in whiteness, even if the benefits of participating may be conferred disproportionately to white or white-passing people.”

In other words, when white people use whiteboards, they are displaying their racist whiteness.

This is the nonsensical garbage that poses as “education” in our system of education.