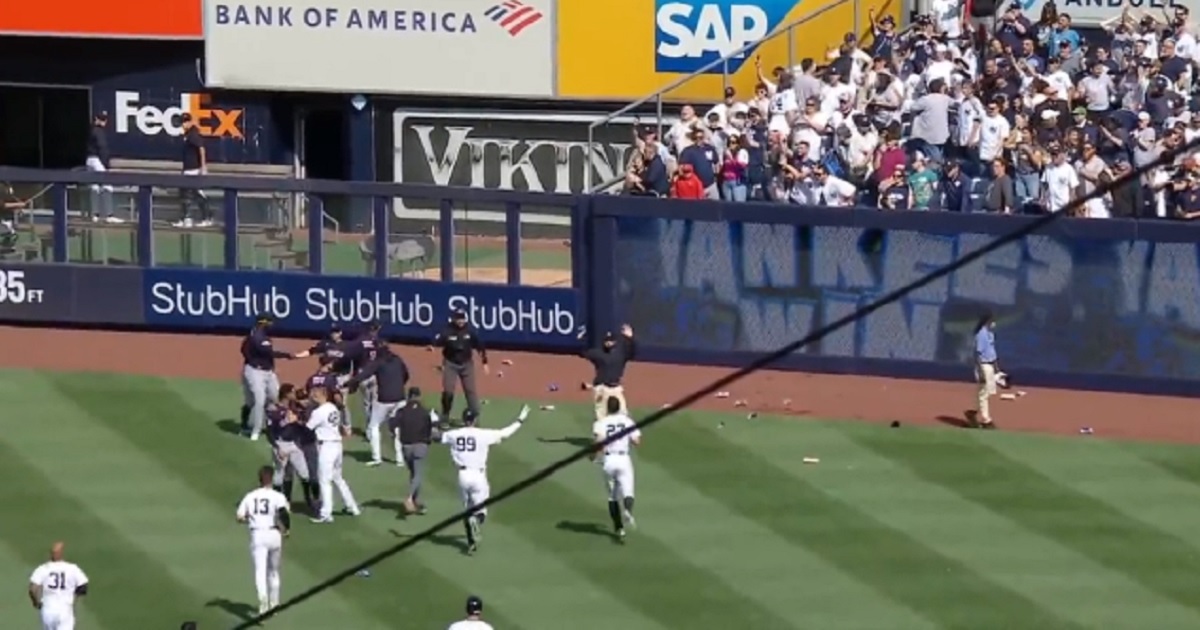 The following article, Yankees Fans Called ‘Worst Fan Base on the Planet’ After Pelting Opposing Players in Ugly Incident, was first published on Flag And Cross.

In words that showed they consider New York Yankees fans to be an infestation of worms in the Big Apple, Cleveland Guardians players sounded off angrily after they were hit with debris from Yankee Stadium stands on Saturday.

“Worst fan base on the planet,” center fielder Myles Straw said after the game, according to the New York Post

Then chaos erupted as beer and debris rained down from the right-field bleachers.

“This is disgusting. Yankees fans should be embarrassed,” Fox Sports MLB analyst Ben Verlander wrote in a Twitter post.

This is disgusting. Yankees fans should be embarrassed. Wow.

Cleveland right fielder Oscar Mercado said a beer can just missed him, and that he caught another heading for his face. An object hit an umpire as well, according to the Post.

“You can celebrate your team walking it off all you want, but don’t throw s**t on the field,” Mercado said, the Post reported.

The stage for the post-game eruption was set when Straw scaled the wall toward left field to share his opinion of fans who were celebrating an injury to Cleveland left fielder Steven Kwan. Kwan hit the left-field wall hard trying to catch what turned out to be an RBI double hit by New York’s Isiah Kiner-Falefa. He then stumbled away and collapsed, according to the Post.

Fans then cheered and mocked the outfielder, which irked Straw.

“[Kwan’s] chin was messed up, his forehead was messed up, just give him a breather,” Straw told the Post. “You can chirp all you want, say whatever you want. But when someone’s hurt, that’s not something to joke about.”

Straw said he had never experienced an incident like the post-game attack on the players, one in which Yankees including Aaron Judge went out to calm the scene.

“I usually laugh and [the fans will] laugh back, especially when they get a little smile out of you,” Mercado told the Post. “But bringing violence and throwing stuff on the field and cheering when someone else gets hurt, that’s not OK, and that’s when I draw the line.”

Guardians OF Myles Straw shared his thoughts after today’s game against the Yankees. pic.twitter.com/DJDjtiAUiW

“I think there should be rules set up for that. Because in all honesty, that’s ridiculous,” Mercado said. “And that should not happen. Say whatever you want to say and do whatever you want to do. But at the end of the day, there’s got to be consequences for behavior like that.”

Fan misbehavior is can be a problem anywhere, of course. And it can be seen in just about any sport. But an afternoon baseball game, early in the season, is not usually the kind of event where an outbreak like Saturday’s would normally be expected.

Straw said that the fans went too far, even in a world where opposing players expect to hear a lot they do not like.

“They can flip me off, they can say stuff about my family. I really don’t care about that,” Straw told the Post. “But when someone’s hurt, you don’t prey on that. Just keep your mouth shut and just let them recover.”