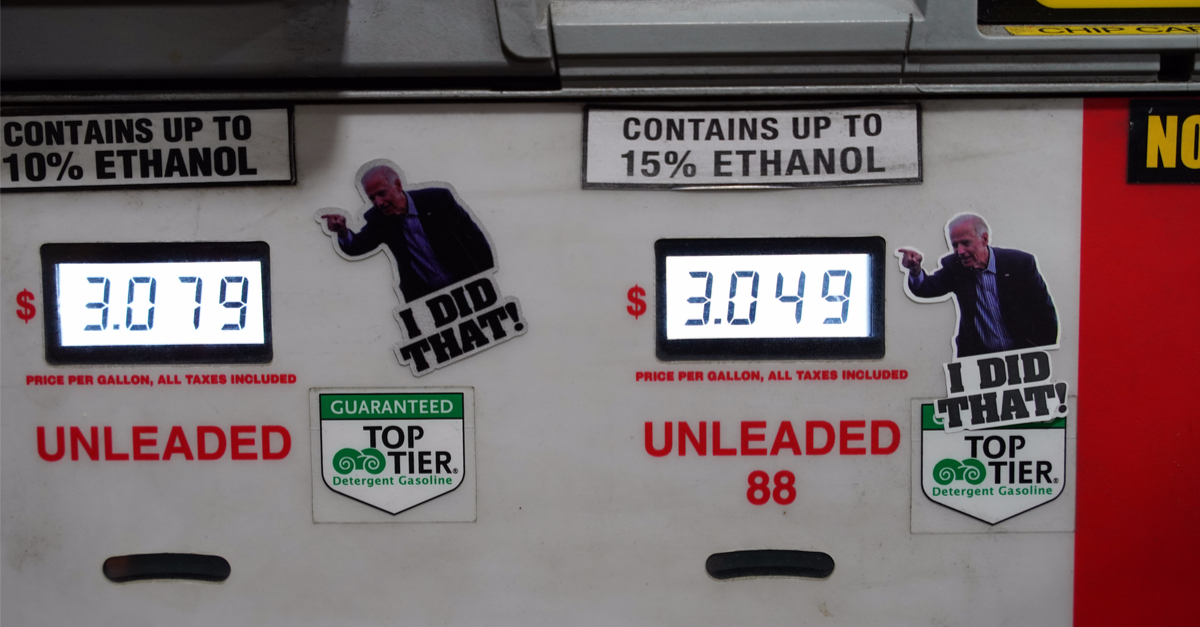 The following article, Gas Station Owner Fined Over ‘I Did That’ Biden Stickers, was first published on Flag And Cross.

As our nation continues to face the threat of Biden-flation with as much gusto as we can muster, it appears as though some folks are still trying to run cover for the failing Commander in Chief.

Joe Biden, who had to be goaded into even running for office, has been steering a less-than-effective Executive Branch through some of our nation’s most troubling times, all while he and the Vice President’s inner circle continues to dwindle and starve itself.  In fact, Biden’s performance has been so thoroughly and universally criticized that it is not unusual to find his visage adorning gas pumps, smiling wryly and captioned “I did that!”, in regard to the price of petrol.

Now, one gas station owner is being fined over the popular stickers.

British oil and gas giant BP has given fresh meaning to the term “sticker shock” by reportedly fining a Wisconsin gas station for displaying an image of a grimly smiling President Joe Biden with a pointed finger captioned “I did that!” on a pump.

Customers across the country are attacking the president over soaring prices caused by Bidenflation, however BP appears to be bringing in punitive measures of its own to stop the practise.

A Wisconsin gas station owner has told Sky News Australia BP hit her with a $400 fine because a customer attached a sticker criticising Biden to a pump.

The situation was simply silly.

“We keep taking them off, not that I want to, and they keep putting them back on. We can’t have someone standing out there 24/7 but yeah it cost me $400 in our money from BP because I have those stickers on there. I don’t care. Truth hurts doesn’t it,” Coy said.

The stickers have become a hot-button issue for Americans of late, with a Pennsylvania man being charged with a number of crimes after playing them on local gas pumps.

Continue reading: Gas Station Owner Fined Over ‘I Did That’ Biden Stickers ...

If a person owns the Gas Station, the Law Enforcement Officers, actually has the legal right to arrest the owner of the Gas Station, for a ” I did that”. I watch people all the time, making turns, no turn signals, i watch people tail-gate, which is also dangerous, in my town, to my knowledge, no one gets a ticket..