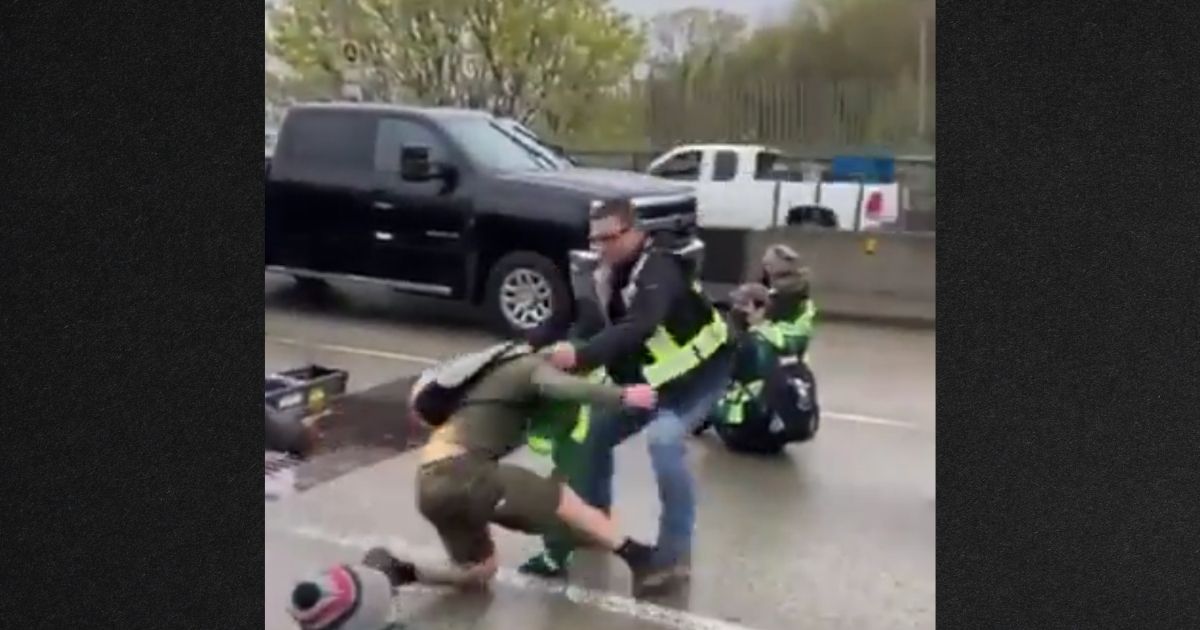 Commuters showed little tolerance for climate change protesters who tried to block a bridge during the Thursday-morning commute in Vancouver.

Video shows that drivers who had stopped for the protesters blocking traffic dragged them to the side of the road so that they could be on their way.

“I’ve got to get to work,” one commuter grumbles in a video posted to Twitter.

Some of these protesters have been intentionally gluing themselves on the highway, blocking traffic. pic.twitter.com/1vFsR2ooWw

“There are bigger issues here,” a protester replied amid a scene of drivers dragging protesters by shirts, safety vests or whatever they could grab onto to get them out of the way. Protesters tried returning to the middle of the bridge, prompting one man to say, “Bro, you want to die, bro?”

“We’re all going to die if we don’t do something,” one protester argued back before the police arrived to end the standoff.

The Ironworkers Memorial Bridge protest, which took place at about 7 a.m., resulted in the arrest of one woman, according to the Vancouver Sun.  No injuries were reported, although there was one accident police called minor.

“Demonstrators who block vital pieces of infrastructure, like bridges and major intersections, put themselves in danger and create a safety risk for the rest of the public,” Vancouver Police Constable Tania Visintin said in a statement,

“We know these incidents frustrate the public, and we thank everyone for their patience while VPD responded to this protest,” she said, according to Global News.

The protest was orchestrated by Save Old Growth, which opposes logging in the British Columbia region of Canada.

“I’m profoundly disappointed that these small groups of people are so self-absorbed and think so highly of their opinions and their so-called rights that they feel it’s okay to intrude in the rights of other British Columbians,” he said. “I reject it categorically and I’m hopeful that there will be significant consequences for their actions.”

Since January, 84 people have been arrested in 10 separate protests.

“We’re done being afraid. We won’t stop until the government passes legislation to end all old-growth logging,” Julia Torgerson, a spokesperson for the group, said in a release.

“This is not a big demand, we’ve only got 2.7 percent of the productive old-growth left. Killing the last of these ancient trees is a death sentence for millions of Canadians due to ecological breakdown,” she said.

Protester Brent Eichler, who was on day 28 of a hunger strike, said the issue is about life and death.

“We are entering the darkest age of human history, and facing mass starvation as we approach a two degrees increase in global average temperatures. The B.C. government is aiding in the destruction of the country,” he said.

The “climate” is not a problem to be solved, but an excuse to transform the republic into a Marxist paradise (i.e. heIIhole).