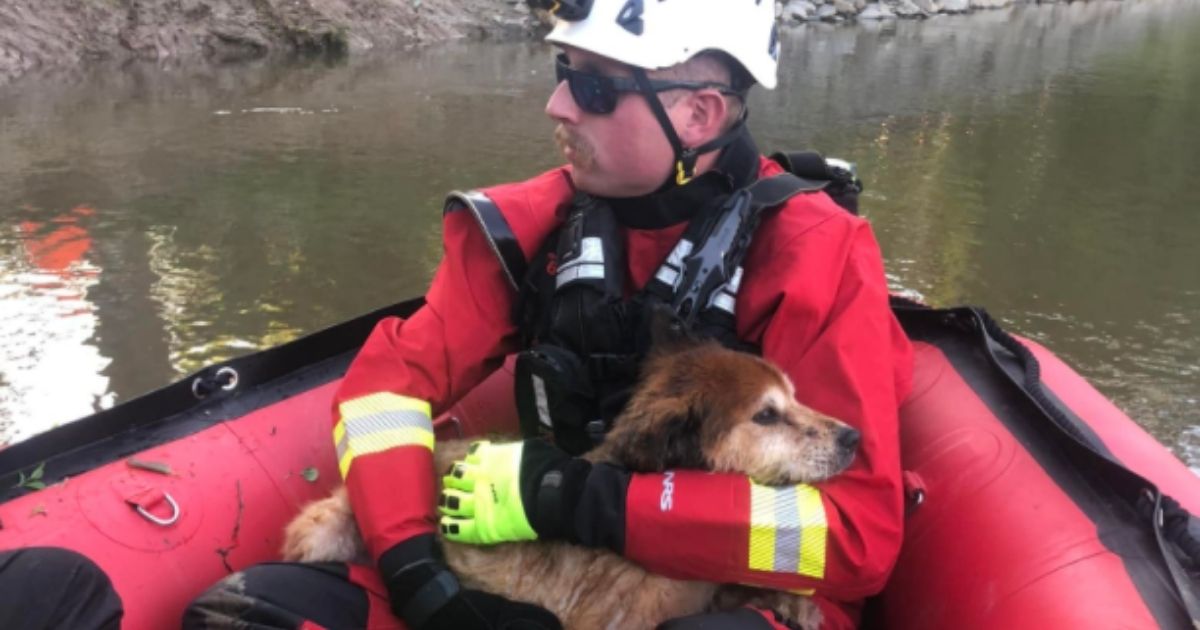 The following article, Rescue Team Saves Exhausted 16-Year-Old Dog That Was Swept Away by River and Tangled in Weeds and Fishing Line, was first published on Flag And Cross.

Mr. Hanley is distinguished, an older dog coming in at an impressive 16 years of age. His eyesight was going, but that didn’t doom him earlier this week.

On Tuesday, shortly after 6 p.m., owner Ariel Perez witnessed a horrifying sight as the dog was carried off by the fast-moving water of the Walnut Creek in Raleigh, North Carolina.

While Mr. Hanley was aware of the water and wasn’t known to go in for a dip, Perez said something must have gotten his attention and lured him out. The dog had been let outside but didn’t return immediately, which spurred Perez to search for him.

Regardless of the cause, Perez saw his elderly dog being carried away, with only his head and collar visible as he was swept toward the Neuse River.

Perez called 911, and within minutes the Knightdale Fire Department’s Swift Water Rescue Team was on its way.

Mr. Hanley had done his best to stay afloat but had become trapped along the riverside, tangled in briers and fishing line. Rescuers spotted him and headed to his location.

“It just looked like the dog was trying to hold on for dear life,” said Capt. Matthew Toler with the Knightdale Fire Department. “It was kind of trying to do the doggy paddle, but once we pulled it into the boat, you could tell that the dog was extremely cold and was just clinging onto Lt. Sheehan.”

“Tonight around 6:15 our crews along with Raleigh Fire Engine 26 were dispatched to a dog that had fallen in the river and was trapped in some debris,” the Knightdale Fire Department shared on April 19.

“Upon our arrival crews quickly assessed the situation and the decision was made to deploy our boat for a rescue. The dog was quickly located and pulled from the rising and cold Neuse River. Great job to all who assisted.”

One of the responding firefighters said this case hit home.

“We try to do a risk analysis for everything, so we’re going to take a higher level of risk for a human life than a dog life, but I’m a dog lover,” Knightdale Firefighter Lt. Aidan Sheehan told WTVD. “I’ve got a 9-year-old golden lab at home. It’s just important we get everybody home.”

Photos of the rescue show the aging dog collapsed against his rescuer, clearly thankful to be out of the water and headed to safety — but perhaps not quite as thankful as his owner.

“I was really just thankful of … how passionate they were to get him out of the water,” Perez said. “They were all working together to get him out.

“I guess he doesn’t want to leave yet, either. He’s got a little fight left in him.”

After a warm bath and some food, the dog was back to being himself — though probably a bit more wary of the water.

Continue reading: Rescue Team Saves Exhausted 16-Year-Old Dog That Was Swept Away by River and Tangled in Weeds and Fishing Line ...