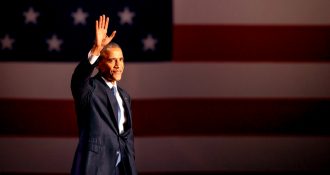 In a speech delivered on Thursday, ex-President Barack Obama called for more, not less, censorship of conservatives and Republicans online.

Obama scoffed at the First Amendment during his talk at Stanford University and claimed to have spent months studying the subject.

“The First Amendment is a check on the power of the state. It doesn’t apply to private companies like Facebook and Twitter,” he said, calling for more “value judgements” on content moderation and censorship on social media.

Obama went on to complain that people he disagrees with have the same ability to speak online as his compatriots.

“[O]ver time we lose our capacity to distinguish between fact, opinion, and wholesale fiction. Or maybe we just stop caring,” he insisted.

He then added that too much information online makes it difficult to discern what is and isn’t true.

“Our brains aren’t accustomed to taking in this much information this fast, and a lot of us are experiencing overload,” he explained.

Obama then said dangerous people are using the Internet to distract people.

“People like Putin and Steve Bannon for that matter understand it’s not necessary for people to believe disinformation in order to weaken democratic institutions, you just have to flood the public square with enough raw sewage,” he exclaimed.

He then said that people who disagree with Anthony Fauci are killing people.

Obama claimed he had the proper set of ideals to guide Internet censorship:

Whether it strengthens or weakens the prospects for a healthy inclusive democracy.

Whether it encourages robust debate and respect for our differences.

Whether it reinforces rule of law and self-governance.

Whether it helps us make collective decisions based on the best available information.

Whether it recognizes the rights and freedoms and dignity of all of our citizens.

This list is hilarious, because his side of the political aisle opposes ALL those principles.

In any case, Obama then insisted that “Regulation has to be part of the answer.”

Just like every other Democrat, Obama is a goose-stepping fascist where it comes to his desire to eliminate free speech and hobble the Internet.