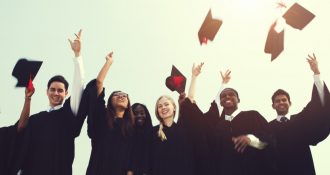 American universities and colleges are increasingly holding separate, segregated graduation ceremonies where white and/or heterosexual students are not allowed to attend.

In some cases, schools are holding what they are calling “Lavender Graduation Ceremonies” for students who claim to fall under one or another of the silly labels that encompass the “LGBTQ” genre of political ideology.

According to Campus Reform, universities including Florida State, the so-called Catholic Saint Louis University, Iowa State, Ohio’s Kent State, and more, are holding gay-only … or “whatever”… graduation ceremonies this year.

The gay-only ceremonies are not the only segregated events, either. Even more universities have been holding black-only graduation events for years, already.

And according to the Washington Times, Yale University, Dartmouth College and the University of Michigan are holding segregated ceremonies for Asian and American Indian graduates.

There is a reason for these segregated ceremonies. These schools specifically aim to tear down the U.S.A., to separate it, the sow division, distrust, hatred, and dissolution.

They have created a caste system, and someone has to be at the bottom.