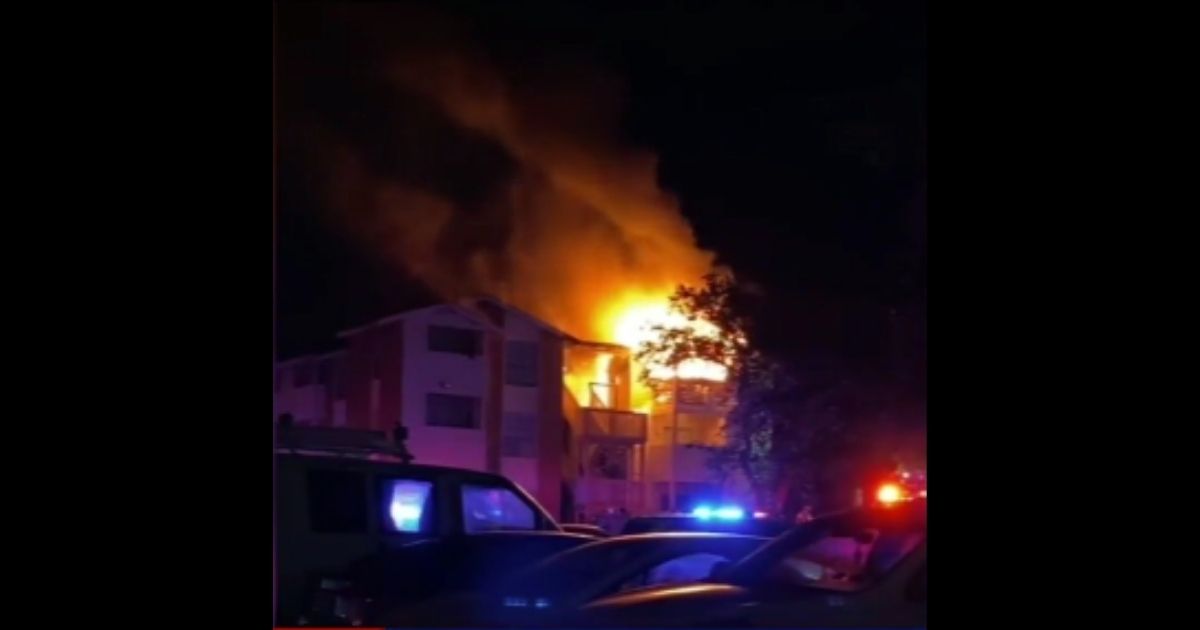 The following article, Firefighters Save Man and Dog Trapped on Third Floor of Burning Apartment with No Way Out, was first published on Flag And Cross.

Early Tuesday morning, a woman in North Austin, Texas, was startled by the sound of shouting coming from a nearby apartment complex.

A quick peek outside revealed the cause: The apartment complex was on fire.

“I heard a gentleman screaming very loudly so I peeked out my window and looked right across the way and I could see the blaze of flames, so then I ran outside,” Jessica Deleon told KTBC-TV.

Between the smoke alarms and people being alerted to the danger, most of the residents were able to escape without an issue — except for one man and his dog, who were trapped on the third floor with no way out.

When Travis County firefighters arrived on the scene, the flames were already engulfing the third floor and shooting through the roof of the building.

“He had his head outside the window with smoke coming out and he was audibly screaming, ‘Help me,'” Travis County Fire Chief Nick Perkins recalled.

“[Emergency Services District No. 2] Firefighters and Round Rock Fire Department responded to a fire at a three story apartment early this morning,” the Pflugerville Fire Department Facebook page shared on Tuesday.

“Upon arrival crews found heavy fire coming from the third floor and roof. There was an occupant trapped along with his dog at the fire.

“ESD2 firefighters rescued the occupant and his dog over a ladder from a third floor window. The occupant was evaluated and refused ambulance transport. The fire was brought under control by the crews and ladder trucks onscene.”

The fire ended up damaging 24 units and leaving 12 without power. An investigation into the cause of the blaze is ongoing.

While the complex sustained damage, it was a blessing that no lives were lost and no injuries were reported.

“It’s a great relief. I knew someone was in trouble … so that was terrifying, and I’m so glad that they rescued him,” Deleon said.

“We are happy to report there were no casualties from the fire that took place at the Churchill Crossing Apartments last night,” Perkins added. “With the quick actions of firefighters, help from law enforcement, we successfully evacuated all tenants and their four-legged friends quickly from the building.”

“Have you ever thought, ‘How would I get out of my apartment or my house in the event that it caught on fire?'” Perkins asked. “And you really want two ways out. So in this instance, the way that this gentleman would usually exit his apartment or his bedroom was not an option.”

The Pflugerville Fire Department also noted that the man had a working smoke alarm, which increased his response time and the likelihood of survival.

Continue reading: Firefighters Save Man and Dog Trapped on Third Floor of Burning Apartment with No Way Out ...