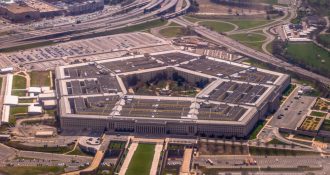 The Pentagon’s first Chief Architect Officer Preston Dunlap has resigned saying that the government is failing to keep up with other countries on the tech front.

Dunlap has held his position since 2019, but is already calling it quits in frustration with a warning that the U.S. is at serious risk of falling behind other militaries in the fields of satellite technology, weapons development, and artificial intelligence.

He was particularly worried that the U.S. is too bound in process and is not thinking outside the box enough and that the Pentagon needs to think more like innovators such as Elon Musk.

“We’re falling behind the commercial base in key areas, so we’ve got to catch up,” Dunlap told Bloomberg News. As a result, the U.S. risked losing its technological edge against potential adversaries, he said.

But, as HotAir’s Jazz Shaw notes, Dunlap is not alone in issuing such warnings:

Sadly, Dunlap isn’t the only one of the Pentagon technology wizards to bail out recently. David Spirk, the Defense Department’s outgoing chief data officer, resigned earlier this month. He too warned that the Pentagon isn’t focusing enough on areas such as artificial intelligence, machine learning and quantum science, and could soon fall behind China in these areas. At the end of last year, the U.S. Air Force’s first chief software officer similarly turned in his resignation, saying that we are “losing the AI race to China.”

The Pentagon is undergoing a serious “brain drain” at what may be the worst possible time. Only recently, the Defense Intelligence Agency warned that China is close to outpacing us in both space warfare and espionage with their rapid advances in technology. (Most of which they stole from other countries but then improved upon rapidly.)

It isn’t surprising, really. America’s military forces almost always fall behind the rest of the world in times of peace. It is times of war that the U.S. pulls ahead.

But that is a dangerous game to play. After all, falling behind in the first lace means that the U.S. needs time to pull ahead. And we simply cannot just assume we’ll have that time with a war going on.