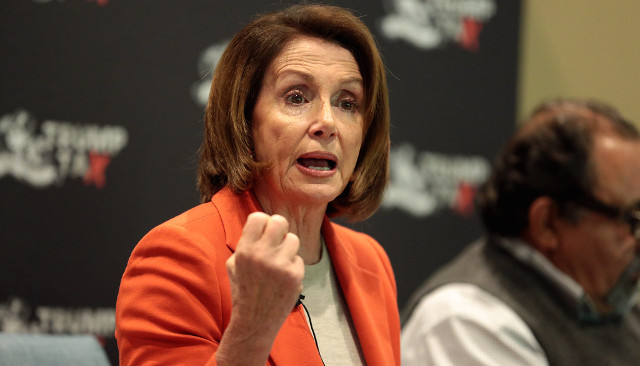 The following article, Pelosi Snaps at FAA Over Accidental Capitol Evacuation, was first published on Flag And Cross.

One of the narratives that the January 6th committee is attempting to bolster is that the Capitol is some impenetrable fortress, guarded by some of the America’s most capable law enforcement professionals.  This assists in their claims about some grand conspiracy, reaching all the way to the top of the Trump administration and the alternative right-wing media.

If the Capitol were protected instead by buffoons, it really takes the wind out of the sails of their hyperbolic hypotheses, as it would make their “insurrection” storyline look a little more like a tourist flash-mob.

The Capitol Police could not hold her back. Could not push back against her awesome physical power when she stormed the capitol to demand a recount, piss on democracy and take this photo for tweetiebird to see.

Beware of Granny!
She spits on the law!
Grannageddon!!! pic.twitter.com/CoBxIK97pA

And so when the Capitol cops forgot to check the Washington Nationals baseball schedule before evacuating the entire building this week, Nancy Pelosi was incensed.

House Speaker Nancy Pelosi late Wednesday grilled the Federal Aviation Administration (FAA) for failing to notify the U.S. Capitol Police of a planned demonstration at National Park that caused an evacuation at the U.S. Capitol.

The U.S. Capitol Police had issued an evacuation order after tracking “an aircraft that poses a probable threat to the Capitol Complex.”

An email alert gave guidance on where individuals in several locations should move. But the aircraft in question was ultimately determined to be a single-engine private Cessna plane that entered restricted airspace over the U.S. Capitol, dropping off military parachutists at National Parks for Nationals vs. Diamondbacks baseball game.

Capitol Security officials said that they did not get a flight notification, which they usually receive. This triggered the alert and prompted the evacuation of the U.S. Capitol.

The House Speaker was enraged.

Pelosi praised the Capitol Police for keeping the safety in mind of all those who work at the Capitol. However, she slammed the FAA, saying the failure to notify Capitol Police of the pre-planned flyover is “outrageous and inexcusable.”

“The unnecessary panic caused by this apparent negligence was particularly harmful for Members, staff and institutional workers still grappling with the trauma of the attack on their workplace on January 6th,” Pelosi said in a statement obtained by Fox News.

“Congress looks forward to reviewing the results of a thorough after-action review that determines what precisely went wrong today and who at the Federal Aviation Administration will be held accountable for this outrageous and frightening mistake.”

A frightening mistake, indeed, and one that appears to blow the cover off of Pelosi’s “fortress” narrative.