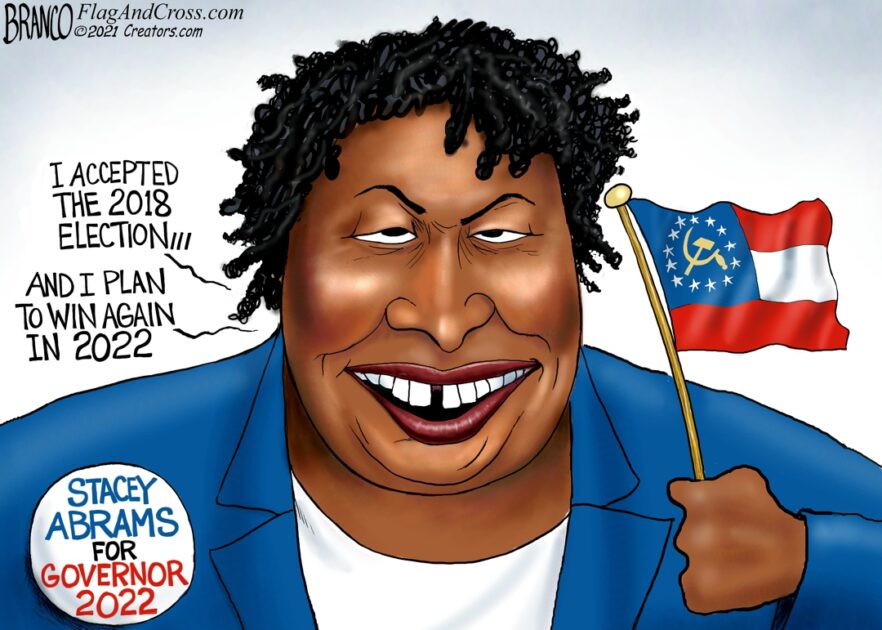 It’s a near-certainty that Stacey Abrams will be the Democratic candidate for governor in Georgia in November. The question is whom she’ll be facing — and what rules they’ll be playing under.

While the Democratic field has been cleared for Abrams (who never really conceded the last gubernatorial election, it’s worth noting), incumbent Republican Gov. Brian Kemp is facing a primary challenge from former Sen. David Perdue, who is backed by former President Donald Trump. (Trump, as you might have heard, remains unhappy with how Kemp handled the aftermath of the 2020 presidential election in the state.)

And when the GOP challenger is picked, there’s some question as to whether some Georgia voter laws will remain.

For instance, Abrams is challenging how the state’s elections are run, including an “exact match” ID law, via a federal lawsuit, according to The Associated Press.

(That law was part of an election integrity push by Georgia Republicans — and here at The Western Journal, we’re strong supporters of election integrity, no matter how much Big Tech tries to punish us for raising questions about the security of the vote. We’re not going to bow to Silicon Valley — and if you want to support our fight, please consider subscribing.)

Whether or not Abrams’ lawsuit succeeds, the ongoing trial is making one thing abundantly clear: If she picks political appointees like she picks her expert witnesses, she should never be governor.

According to Just the News, Morehouse College political science professor Adrienne Jones — who was called to the stand Friday by Abrams’ Fair Fight Action Inc. group, the plaintiff in the lawsuit — admitted under cross-examination she had called for black women to “overthrow” Donald Trump and claimed that Republicans were aiming to put Americans in “internment camps.”

Jones also made a political contribution to State Election Board member Sara Tindall Ghazal, one of the defendants in the case — a fact that Jones said she wasn’t even aware of.

Jones was one of the experts meant to prove this. Lawyers for Georgia Secretary of State Brad Raffensperger and other state officials, however, shed a disturbing light on her political beliefs during cross-examination, according to transcripts obtained by Just the News.

For example, she was questioned about an August 2018 article she wrote that compared the 2018 gubernatorial election to 1955 and said the GOP was setting up internment camps for its ideological rivals.

“Are you asserting here that Republicans in Congress are encouraging internment camps in 2018?” defense attorney Carey Miller asked.

Miller, apparently in disbelief, asked again: “You are?”

Miller then questioned her about an article she wrote that said the Democratic Party’s ability “to pay attention to black and minority voters will be critical to its ability to overthrow the president.”

At least this time, Jones claimed she had employed “a dramatic flourish.”

“This would not be a literal overthrow,” she said. “I’m talking about elections here.”

Then there was another issue regarding the Voting Rights Act of 1965, which Jones had addressed in her expert report and writings elsewhere. She said that when the GOP reauthorized the bill in 2006, they were actually trying to do away with it.

“But Miller also inquired why Jones, in her expert report and earlier writings, also criticized Republicans who tried to amend the law and voted against it when the amendments failed, suggesting Jones was so biased that there wasn’t any scenario in which Republicans could be viewed favorably under the professor’s analysis,” Just the News reported.

“Dr. Jones, I want to make sure I understand your testimony here,” Miller said. “So voting yes means essentially a no vote, right?”

“Seeking to amend the bill is a similar contention; seeking to kill it, right?” Miller said.

“And voting no is also a problem, right?”

“Is there any option for a Republican legislator that you would not take issue with?” he asked.

“Based upon the history of reauthorizations of the Voting Rights Act, no, not really,” she said.

And there were other fun moments to be had, too. Miller got Jones to admit she thought Kemp was a “voter suppression advocate,” then asked: “Would it surprise you to know that between 2016 and 2020 Black voter registration has increased 130 percent?”

“It would not surprise me,” Jones said.

And then there was Jones’ $315 donation to Ghazal: “You are aware that Ms. Ghazal is a defendant in this case?” Miller asked Jones.

The judge in the case noted Miller “is trying to discredit this witness. … I think he is allowed to do it.”

“I’m assuming he’s offering this trying to show me that, hey, that this witness is biased,” he said at another juncture.

It does, however, speak to a deeper point than that. Abrams’ fight against voter integrity laws comes from a far-left position, adopted by too many in the Democratic Party, that any restriction on voting is a restriction too far.

No, most of them aren’t talking about “overthrowing” Donald Trump (“a dramatic flourish,” clearly) or about “internment camps” for political adversaries (apparently not as much of a dramatic flourish, if Just the News’ transcripts aren’t lacking in context).

But this is who Abrams’ organization put on the stand to make the case against voter integrity. She wasn’t a hostile witness by the defense. Oh, no — this is who Fair Fight thought would make it look good.

While the “Saint Stacey” myth continues to abound in the media, it’s high time to look at those around her and what they really believe. It certainly doesn’t match up with her campaign rhetoric, that’s for sure.