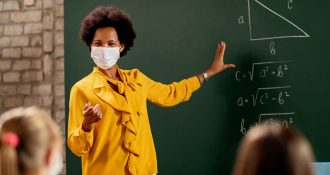 The following article, National Math Education Council Urges Schools to Teach Social Justice Instead of Math, was first published on .

The National Council of Supervisors of Mathematics has gone ultra-woke and is now demanding that schools stop teaching math and instead teach about “social justice” to combat “privilege” and “oppression” in mathematics.

The “education” group put out a statement showing that they no longer are about math, but instead care about left-wing lunacy, The National Desk reported.

“A social justice stance requires a systemic approach that includes fair and equitable teaching practices, high expectations for all students, access to rich, rigorous, and relevant mathematics, and strong family/community relationships to promote positive mathematics learning and achievement,” the group said in a recent statement. “Equally important, a social justice stance interrogates and challenges the roles power, privilege, and oppression play in the current unjust system of mathematics education—and in society as a whole.

This anti-education group added that math is “unjust” because it is “grounded in a legacy of institutional discrimination based on race, ethnicity, class, and gender.”

The group went on to recommend that schools do a yearly audit to make sure it is pushing “social justice” in place of math.

“We must hold the profession and our organizations accountable to making a just and equitable mathematics education a sustainable reality,” the NCSM said.

Once again, we see another organization whose purpose has been torn down and replaced with leftist dogma. It is just another group once dedicated to science and education, now lowered to pushing the left’s dangerous anti-education agenda.

Liberals truly destroy everything they touch.

Just when you come to believe children can’t be more “dumbed down” by the education establishment than they currently are, and new, and even stupider, idea emerges.