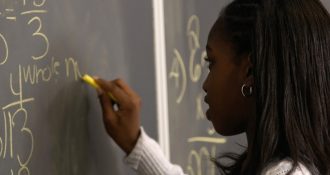 The following article, Florida Rejects 41% of Match Textbooks Because They’re Filled with Critical Race Theory Wokeness, was first published on .

Each state has the responsibility for purchasing textbooks for their kids but Florida just rejected 41 percent of the textbooks offered for the state’s schools because they are filled with leftist wokeness instead of math.

Florida rejected the submitted textbooks that companies want to sell to the state for the coming school year because they are filled with Critical Race Theory garbage, Common Core foolishness, and other left-wing agendas instead of a legitimate math curriculum.

“Reasons for rejecting textbooks included references to Critical Race Theory (CRT), inclusions of Common Core, and the unsolicited addition of Social Emotional Learning (SEL) in mathematics,” the Florida Department of Education said in a news release.

The state reviewed 132 textbooks but rejected 54 of them, saying that they violated state standards.

“The highest number of books rejected were for grade levels K-5, where an alarming 71 percent were not appropriately aligned with Florida standards or included prohibited topics and unsolicited strategies,” the department added.

DeSantis added that the rejected books are attempts to indoctrinate students, not teach them math.

“It seems that some publishers attempted to slap a coat of paint on an old house built on the foundation of Common Core, and indoctrinating concepts like race essentialism, especially, bizarrely, for elementary school students,” DeSantis said. “I’m grateful that Commissioner [Richard] Corcoran and his team at the Department have conducted such a thorough vetting of these textbooks to ensure they comply with the law.”

Florida also noted that it has now completed its search and new books are forthcoming.