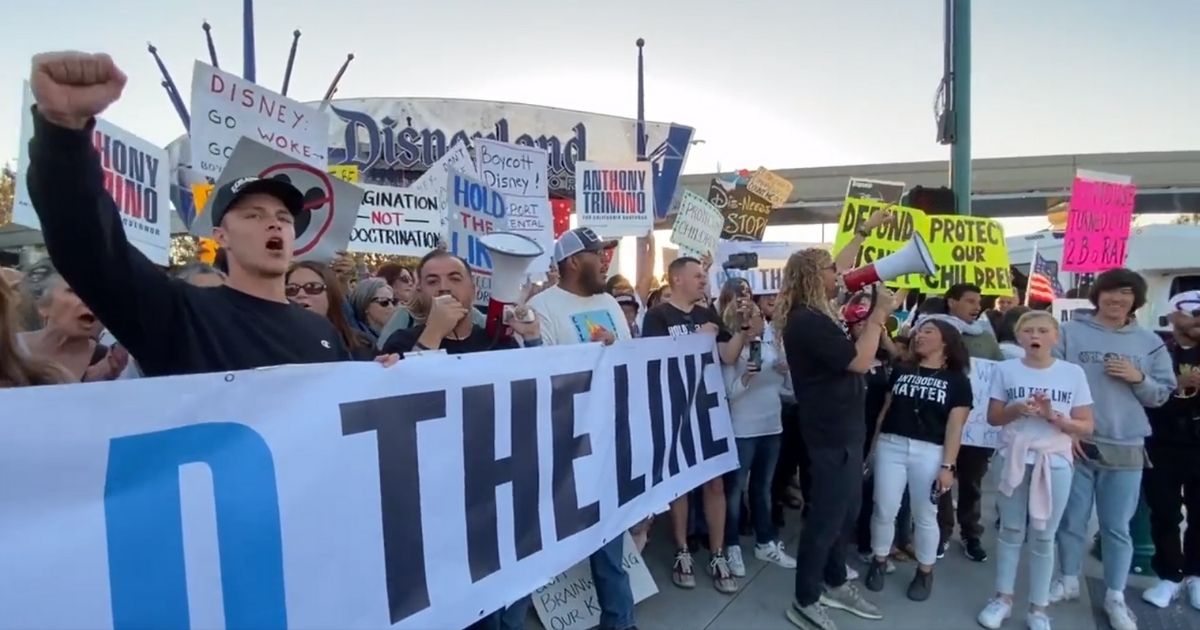 The following article, Bottom Falls Out for Disney, 70% of Americans Turn on Company as Video Shows Anti-Grooming Chants at Park, was first published on Flag And Cross.

A new poll shows that the once-beloved Walt Disney Co. is quickly losing the trust of Americans amid the company’s continuing efforts to push the left’s radical agenda.

The Trafalgar Group survey, conducted April 4-8, found that nearly 70 percent of likely voters say they are less likely to do business with Disney in the wake of reports about the company promoting “queerness” in its content for children.

In one video, Latoya Raveneau, identified as an executive producer for Disney Television Animation, said the company has been pushing hard for what she described as her “not-at-all-secret gay agenda.”

SCOOP: I’ve obtained video from inside Disney’s all-hands meeting about the Florida parental rights bill, in which executive producer Latoya Raveneau says her team has implemented a “not-at-all-secret gay agenda” and is regularly “adding queerness” to children’s programming. pic.twitter.com/eJnZMpKIXT

Most Americans disapprove of that approach, according to the new poll.

The survey said, “News reports reveal Disney is focusing on creating content to expose young children to sexual ideas. Does this make you more or less likely to do business with Disney?”

Meanwhile, only 9.4 percent said Disney’s support of radical leftism makes them interested in giving the entertainment giant more support, while 22.5 percent said they had no opinion on the issue.

According to the poll, people across the political spectrum have found themselves losing faith in Disney. A huge majority of Republicans and independents said they were less likely to patronize Disney now, and almost half of Democrats also agreed.

Independents were also seen turning against the Mouse House, with 72.5 percent indicating they have turned against Disney while only 9.1 percent said Disney’s sexualization of kids makes them more likely to support the company.

But, amazingly, the poll discovered that 48.2 percent of Democrats said they are less likely to do business with Disney, while only 14.4 percent said Disney’s assault on children makes them more likely to support the company.

The survey of 1,079 likely voters had a margin of error of plus or minus 2.99 percent at the 95 percent confidence level.

In more bad news for Disney, the poll also found that large numbers are considering other forms of entertainment to replace Disney’s products.

Breaking down that latter question along party lines also showed that majorities in all three categories are feeling negatively toward Disney.

The survey found 77.6 percent of Republicans are likely to look for other family-friendly alternatives to Disney, and 72.1 percent of independents agreed with that, as did 58.6 percent of those who identified as Democrats.

The upshot here is pretty startling. Usually, in this sort of polling on cultural issues, you see huge numbers of Republicans and a healthy number of independents agreeing, with Democrats disagreeing by just as large a percentage. Such polls typically swing wildly between Republicans and Democrats, with the two sides being polar opposites.

In this case, however, Disney has come out on the losing end even among Democrats.

That might be a sign that the radical left-wing agenda isn’t really even that popular among Democrats, at least when it comes to grooming tiny children to be open for sexual conquest by radical LGBT activists.

The poll comes amid protests against Disney over its radical agenda.

BREAKING: Crowd chants “GROOMING IS WRONG” as the protests outside of Disney continues. #Disney pic.twitter.com/8Xm29041G4

The Ohio-based group Moms for America also has planned a protest for this coming weekend at Disney’s Florida resort.

Correction! It’s at the entrance of Disney Springs not Magic Kingdom!

Of course, all these protests and negative poll results serve as a backdrop to the entertainment company’s failed efforts to defeat Florida’s Parental Rights in Education law, which prevents young children from being exposed to radical LGBT indoctrination and dangerous gender identity politics in the state’s schools.

The left has falsely labeled it the “Don’t Say Gay” law and claimed that it “targets” LGBT kids. But it does no such thing. The law does not even mention homosexuality. It merely “prohibits classroom instruction on sexual orientation or gender identity in kindergarten through 3rd grade and prohibits instruction that is not age appropriate for students.”

One has to ask, what sane adult would want to burden tiny children with sexual indoctrination? Why are liberals so intent on exposing tiny tots to gender identity instruction?

Many conservatives have taken to calling the left’s aim to sexualize children a form of grooming, and that is exactly what it is. Leftists aim to train small children into adopting their sexual views at a very young age without any regard for the wishes of parents.

This is also intended to further undermine the American nuclear family and funnel children into the care of the left.

If the protests and the polls are any indication, the extremists are not winning this argument right now.

But make no mistake, America. Leftists play the long game. They might not be winning today, but they reckon that our resistance will be battered down over time and they will win later. And it is up to us to stop them cold here and now.

Continue reading: Bottom Falls Out for Disney, 70% of Americans Turn on Company as Video Shows Anti-Grooming Chants at Park ...