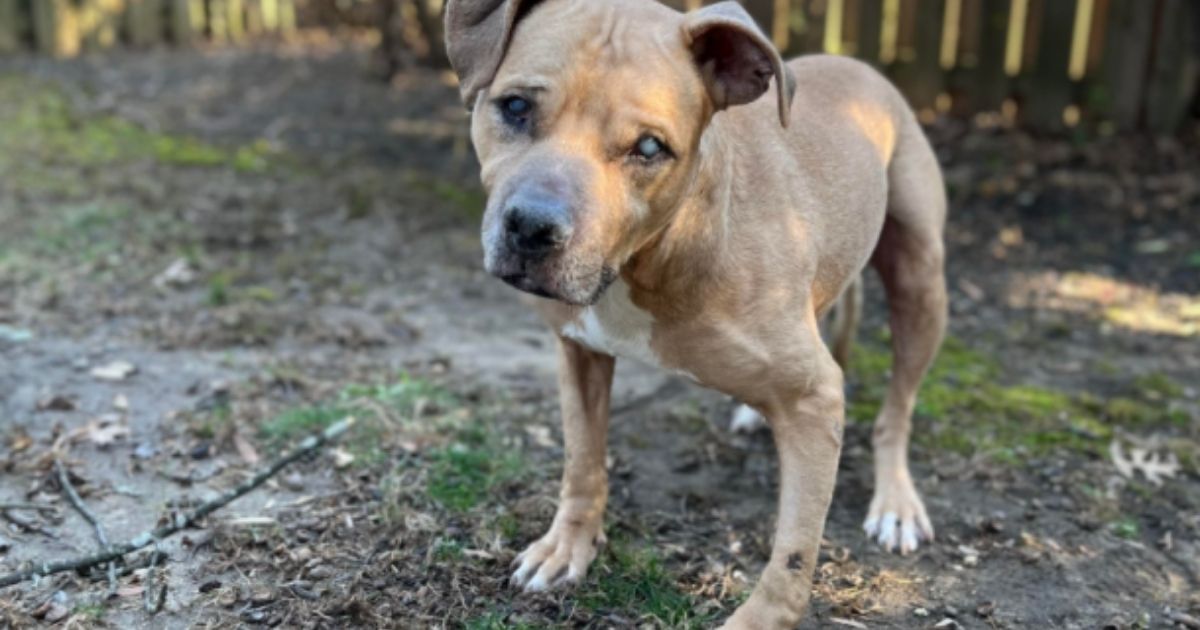 The following article, Sweet, Blind, Old Dog Rescued from Convicted Dogfighter Seeks Family and a Place to Call Home, was first published on Flag And Cross.

Despite his gentle name, “Souffle” has led a tough life, and his sad story is etched into his body.

He’s blind, old and was rescued from a fighting ring where he likely still was being used as a breeder.

Souffle was rescued along with 33 other dogs in Pennsylvania in a bust that included drugs, guns and other alleged crimes involving a convicted dog fighter, Newsweek reported earlier this month.

“A portion of the dogs were on heavy chains outside, and the remainder were in crates stacked inside a garage,” Gillian Kocher, a spokesperson for the Pennsylvania Society for the Prevention of Cruelty to Animals (SPCA), told Newsweek.

“[Souffle] was beyond the ability to fight, but we believe he was still being used for breeding purposes.

“Unfortunately, dogfighting is not uncommon,” Kocher continued. “There are a variety of types of fighting that occur. The off-handed street fights of opportunity all the way through organized multi-state attended fights.

“We see the full gambit in PA and do everything we can to combat against it and put an end to it, but we are limited by the resources we have.”

Souffle was not the only blind dog rescued in the removal, and vets think he lost his eyesight due to under- or untreated eye injuries.

Thankfully, Souffle was rescued from his horrible situation and has taken very well to family life, as he has been cared for by a foster family that has plenty of good things to say about him.

“Souffle is a very sweet senior boy who loves to nap and get pets from his humans,” the family wrote on Facebook.

“This guy loves his treats as much as he loves attention. Souffle gets along well with other dogs, and would do well in a home with another animal with low energy.

“Because Souffle is blind he does need help being guided on walks, he can walk up stairs but does not do well when going down stairs. Souffle is a really good dog just looking to spend the rest of his days giving and getting as much love as possible.”

To that end, the Pennsylvania SPCA, which isn’t sure of Souffle’s age, is looking for a special individual or family to give Souffle the best twilight weeks, months or years a dog could ask for.

After all the ugliness Souffle has endured, hopefully someone will reach out and be able to prove to him just how good he is and how kind people can be.