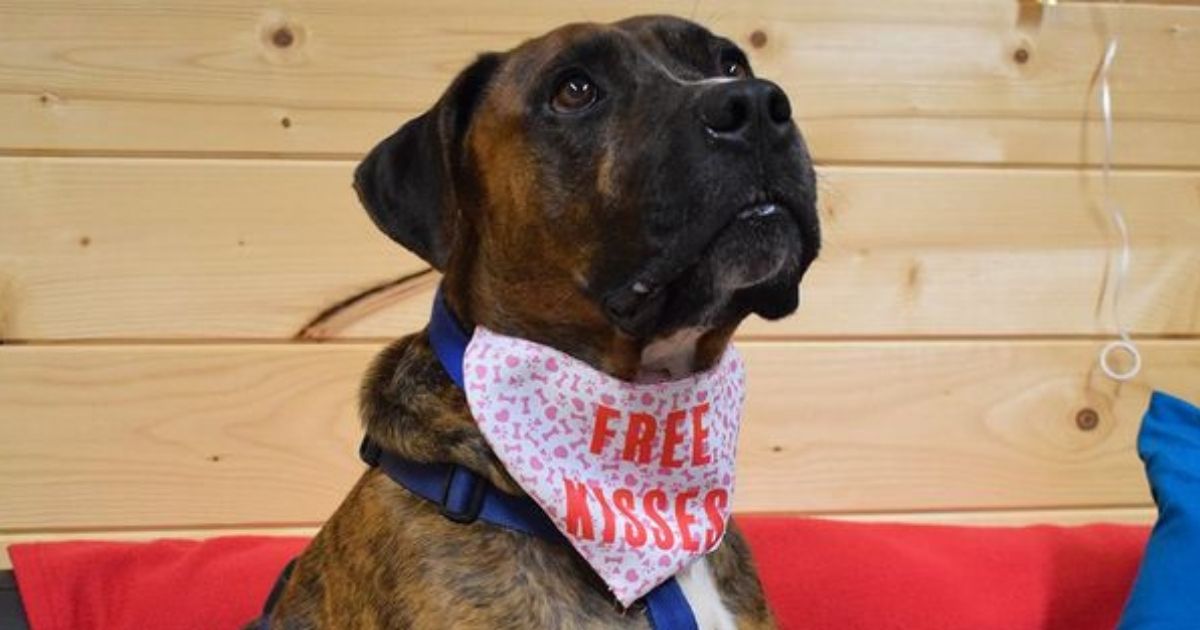 The following article, Dog Stood Up at Valentine’s Adoption Meet-and-Greet Finally Finds Home After 225 Days at Shelter, was first published on Flag And Cross.

Plenty of people look forward to spending time with their special someone on Valentine’s Day, and that was no less true for a pup named Luke.

Staff at the Battersea Dogs & Cats Home in Kent, England, had an extra-special event planned for Luke: a themed meet-and-greet where he would be able to find the love of his life and finally land a forever home.

Except nobody showed up.

The poor dog had already been at the shelter for over 200 days. A 5-year-old mixed breed who enjoys quiet comfort and snuggles, Luke has been difficult to place as he will need to be the only dog in the household and he can take a while to warm up to people.

“Despite being a large dog, Luke is really just a big softie and enjoys nothing more than to cuddle up by a radiator with his favorite people and a cuddly toy,” the shelter’s center manager, Michelle Bevan, told People.

“We’re really hoping that someone will love him for the big lapdog that he truly is and give him the chance to be loved as he deserves,” Bevan said.

Despite his special requirements, it was still sad to see the big fellow get stood up on a day dedicated to love and connection.

“Valentine’s Day is a time to show your appreciation for those you care about, so it’s heartbreaking knowing that Luke will be spending the day without anybody to love after nobody came to meet him for a date,” Bevan said. “Thankfully, Battersea staff were on hand to show Luke plenty of love and affection instead.”

They made the most of it at the shelter, but everyone was still rooting for Luke to find his own special person.

Many followers felt for the dog after hearing about his sad Valentine’s Day, and it wasn’t long before Luke was inundated with fan mail, gifts, donations and — best of all — adoption inquiries.

Suddenly Mr. Popular, Luke could only go home with one family, and that ended up being the Kendricks of Derbyshire, who took him home for a trial run and sealed the deal a few weeks later.

“Remember Luke, our Battersea resident who got stood up on Valentine’s Day?” Battersea shared on Tuesday. “Well we have good news… he’s finally found his home!

“After 225 days, and hundreds of people reaching out, Luke has found the perfect home to match his needs. We hope you have a wonderful time Luke!”

“How Luke stayed in the care of Battersea for so long is a mystery to me, any new owner would have been lucky to rehome him,” dad Karl Kendrick said, according to People.

“Since we’ve brought him home, he’s shown himself to be the perfect dog and has really settled in so quickly — we already love him so much and wouldn’t change him for the world.

“We feel so lucky to be the family who gives Luke his forever home, and he has really made our family unit complete. He’ll never spend Valentine’s Day alone again.”