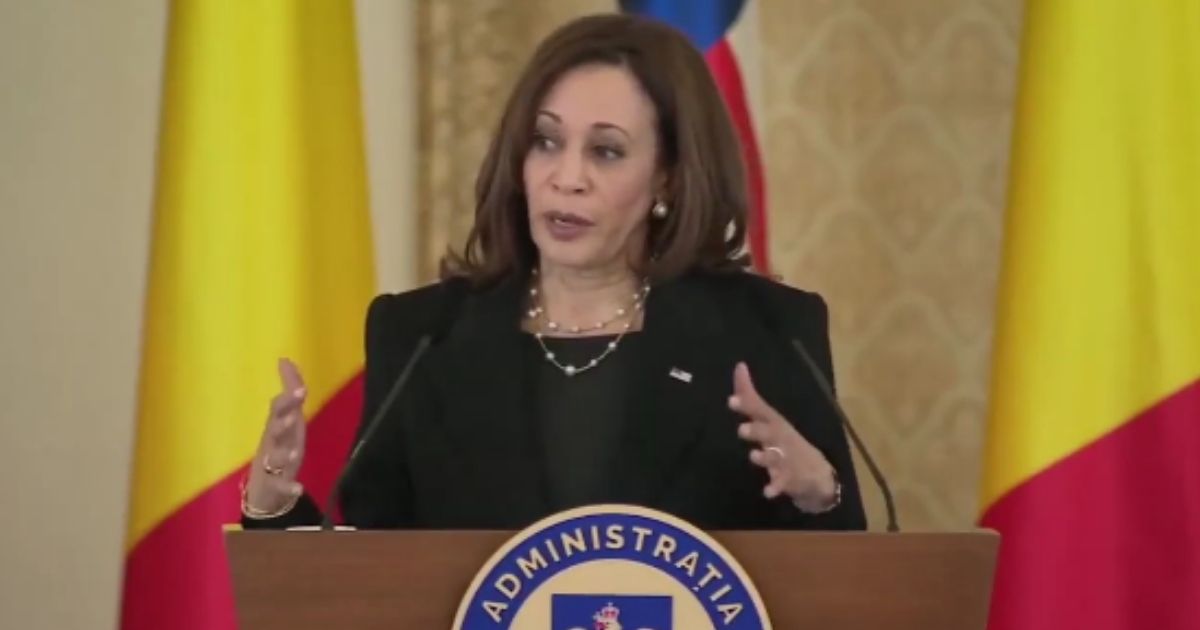 The following article, Kamala Harris Is Asked What Administration Is Doing to Fight Inflation, Listen to Her Jaw-Dropping Response, was first published on Flag And Cross.

Vice President Kamala Harris visited the city of Brotherly Love on Tuesday to address members of the Sheet Metal Workers Association and to meet with union leaders.

Earlier that day, the Bureau of Labor Statistics had released the March Consumer Price Index, which pegged year-over-year inflation at a whopping 8.5 percent.

During an interview that followed her speech, with Tamala Edwards of Philadelphia’s WPVI-TV, Harris was asked what steps the Biden administration is taking to fight the record inflation we currently face.

With a sure and steady tone of voice, Harris replied: “Well, first of all, I acknowledge one must acknowledge that prices are going up. And that people are working hard and, in many cases, they’re worried about whether they can get through the end of the month and make it all work.”

What came next was a three-minute word salad about child tax credits, lower drug prices and her three trips to Europe over the past four months — none of which addressed the actual problem.

Finally, she concluded, at about the 3:45 mark: “What I can say is that people deserve to know that their president, that our administration, is concerned enough to do something about it, and so that is what we are doing.”

Actually, Harris’ vapid response shouldn’t surprise anyone. Nearly every time the vice president speaks publicly, news outlets come away with a new soundbite that bolsters the theory that President Joe Biden really did choose her as an “insurance policy” against a potential impeachment. The truth, is she might actually make a worse president than Biden.

Within 30 seconds, she repeated the phrase “the significance of the passage of time” four times.

Harris’ many blunders from her March trip to Poland and Romania are still fresh in our minds.

“I am here, standing here on the northern flank, on the eastern flank, talking about what we have in terms of the eastern flank and our NATO allies, and what is at stake at this very moment,” she told reporters in Warsaw as she checked her notes.

I suppose it could have been worse. She could have broken out in laughter, which is often her nervous response to a question that intimidates her. Oh … wait. She did that in Europe, too.

During a joint news conference with Romanian President Klaus Iohannis in Bucharest the next day, a reporter asked Harris, “How long should Americans expect — how long should we be bracing for — this … historic inflation and some unprecedented gas prices?”

This was a question she should have been ready for, but Harris was incapable of answering. Following a brief pause, she opened her mouth and delivered a three-minute monologue of meaningless malarkey that had next to nothing to do with the question she was asked.

After veering completely off-topic for two-and-a-half minutes, she essentially said, “We don’t know how long inflation and high gas prices will last. We must stand by our friends and endure the Putin price hike.”

REPORTER: “How long should Americans expect — how long should we be bracing for — this historic inflation and some unprecedented gas prices?”

The terrible impression she made on that disastrous trip outraged a former spokeswoman for Ukrainian President Volodymyr Zelenskyy.  She tweeted, “It would be a tragedy if this woman won the presidency.”

After some fierce backlash, she deleted the tweet. It’s a pity she had to because frankly, I couldn’t agree with her more.

I’ll leave you with this. One Twitter user responded to Harris’ nonsensical answer to this question by posting the following clip of a contestant in the 2007 Miss Teen USA pageant. This young woman clearly had no idea how to answer the question and tried to wing it. The result is painful to watch, but hilarious. (She ended the pageant as fourth runner-up.)

With Harris, it’s just as painful.

Considering her position, though, there’s nothing funny about it.

Continue reading: Kamala Harris Is Asked What Administration Is Doing to Fight Inflation, Listen to Her Jaw-Dropping Response ...