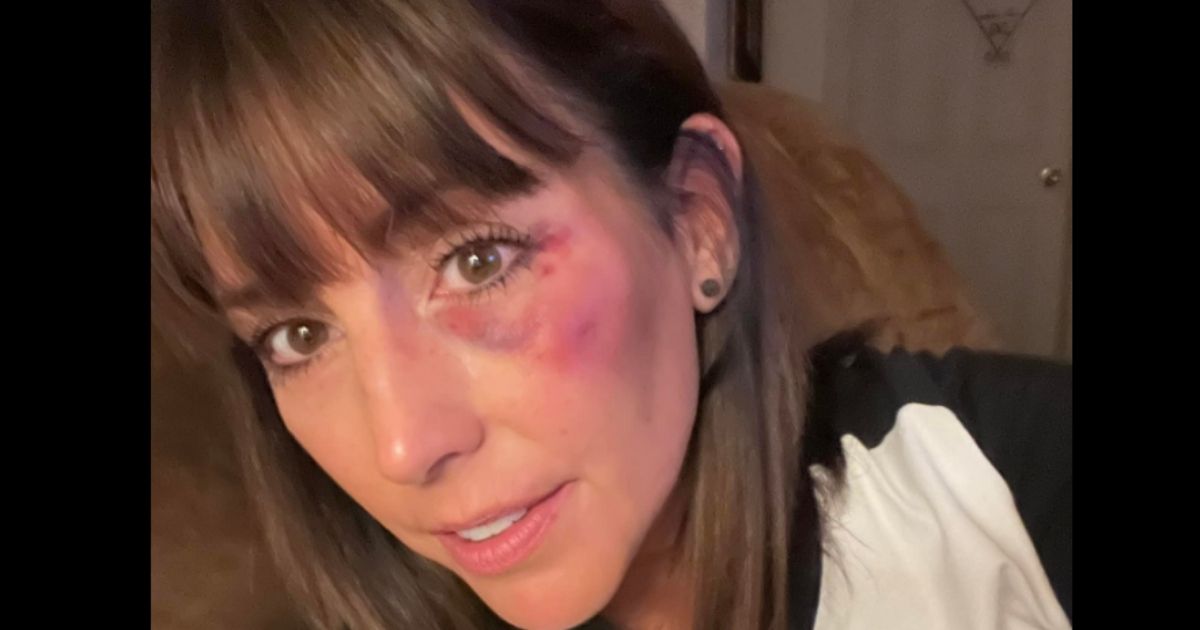 The following article, Softball Umpire Ambushed While Coming Off the Field Now Showing Her Black Eye with Message to All Spectators, was first published on Flag And Cross.

An umpire for a youth softball game was allegedly attacked after a spectator disagreed with her call, but her response to the incident sent an even stronger message.

According to Magnolia State Live, Kristi Moore was serving as an umpire for a 12-year-old softball game in Laurel, Mississippi, on Saturday. After she made a call, Kiara Thomas, a parent of one of the players, allegedly began yelling at her from the stands.

A coach eventually asked Thomas to leave the game because she was cursing. While Thomas did leave the stadium, she reportedly did not leave the complex altogether.

Instead, Thomas waited in the parking lot until after the game. When Moore walked out, Thomas allegedly confronted her and punched her in the face.

Thomas was arrested at the scene and charged with simple assault, Magnolia State Live reported. She was fined $422.25 and released soon after.

This was a senseless act of violence, and Moore had every right to be upset after she was attacked. Yet to her credit, she took to Facebook and issued an extremely level headed response.

“The next time you go to a tournament and you only have one umpire on the field…this is why,” Moore wrote alongside a picture of her bruised face.

On a purely human level, this attack is clearly unacceptable. Beyond that, Moore explained the rise in violence against officials at sporting events could eventually prevent children from being able to play sports at all.

“When you have brand new umpires on the field that may not know everything they should know yet…..this is why. When you don’t feel you have the quality of umpires you should….this is why. When the day comes that your kid can’t play a ballgame because there are no longer officials to call it….THIS.IS.WHY.”

Moore said it is easy to criticize someone from the sideline, but she challenged followers to walk a mile in her shoes before casting judgement.

“Before you post the next ‘funny’ meme about umpires that suck, or are blind, or have missed calls on their phone or whatever it is, before you post about how an umpire was so awful and terrible and lost the game for you…….why don’t you sign up?” Moore wrote. “Get on out there and give it a go.”

She concluded her message with a reminder rooted in Biblical truth.

“Umpires are not perfect,” Moore wrote. “We never will be. But guess what? No one is.”

Sadly, this attack was not an isolated incident. Earlier this month, a video shared on social media showed a referee being attacked by players and spectators at a youth basketball game in Lithonia, Georgia.

Y’all these bad ahh kids got off on the referee

Why the other refs ain’t help tho pic.twitter.com/FGXhxqFDer

According to TMZ Sports, the victim needed 30 stitches after the attack. Kenneth Tarver, the founder of an organization called KB Sports that helped set up the tournament, promised to make future events “safer for the officials.”

Unprovoked attacks are never acceptable, but they are especially disgusting when they come against people who are sacrificing their time to help kids be able to play sports. This violence needs to stop for the good of both youth athletes and those who work with them.

Continue reading: Softball Umpire Ambushed While Coming Off the Field Now Showing Her Black Eye with Message to All Spectators ...