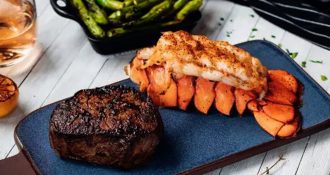 The following article, Restaurants Cut Surf and Turf from Menus Over Soaring Prices and Supply Issues, was first published on .

Many restaurants are cutting surf and turf items from their menus because inflation has caused prices to soar, not to mention the supply chain issues making the items hard to restock.

With food prices up 7.9 percent in February over last year, restaurants that were just starting to recover from the needless COVID lockdowns are now about to face a new Armageddon when customers stop going out to eat because they can’t afford it.

The signs of trouble are already starting as restaurants begin cutting high-priced items to try and keep patrons filling seats.

In January, Beef ‘O’ Brady’s CEO Chris Elliott removed the restaurant’s renowned surf and turf special from the menu after seeing signs that consumers were being impacted by rising inflation.

“People are looking for deals; they’re getting hammered everywhere — at the gas station, at the grocery store,” Elliot said.

…
But in January, Chief Executive Officer Chris Elliott saw signs that consumers were feeling the squeeze of soaring inflation. So he took the $12.99 surf-and-turf dish off the specials list, replaced it with a fish-and-chips platter and slapped a $9.99 price tag on it. Even with the change, though, customer traffic has been flagging in recent weeks.
…

Another example of inflation’s impact is the popular restaurant chain Denny’s, which promotes a $6.99 all-you-can-eat pancake, eggs, and hash brown breakfast. Although their breakfast special is $6.99, the same deal is $8.99 in states with a higher cost of living. In both markets, the restaurant charges an additional .99 cents for bacon.

The nation is on a train to wild inflation, and just as recovery from the left’s disastrous COVID policies was beginning.

Democrats destroy everything they touch. And we are all going to pay the price.