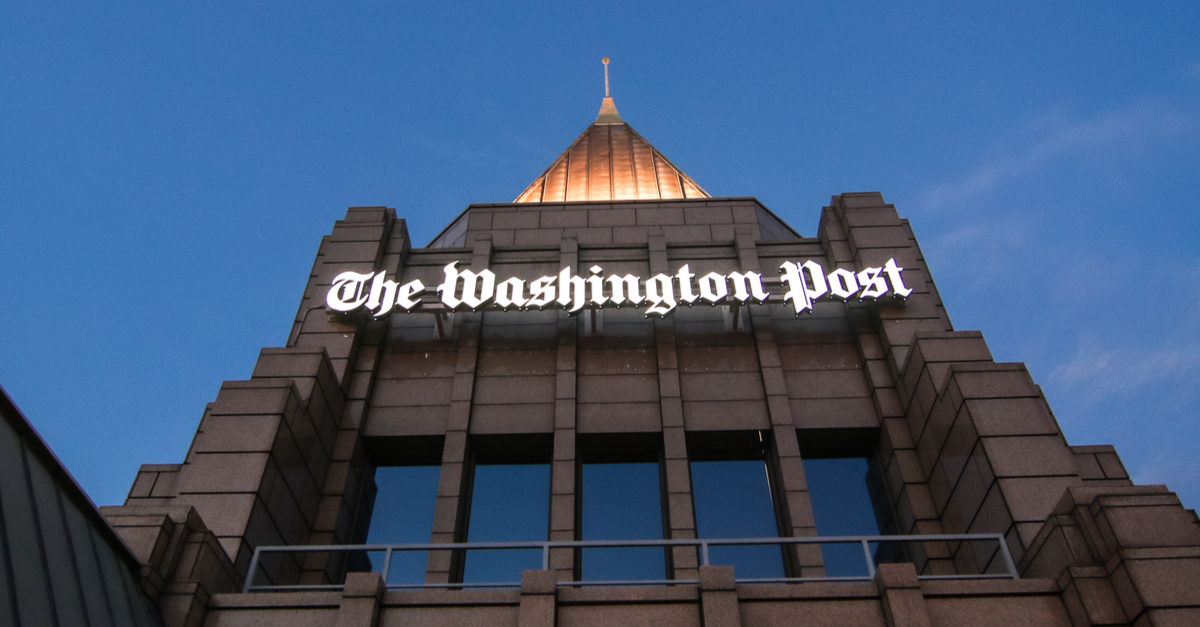 The following article, Oops: WaPo Tries to Start War with Musk, But Everything Goes Bad When People Notice What Got Printed, was first published on Flag And Cross.

“Democracy Dies in Darkness,” says the mast of The Washington Post.

And the Posties say it with a straight face, despite the publication’s ownership by one of the czars of knowledge, commerce and all other things extant and of importance, Jeff Bezos, CEO of Amazon.

The Post pages recently dripped with irony as an op-ed contributor called for regulation “to prevent rich people from controlling our channels of communication.”

That’s what the Post said, or at least that’s what Ellen K. Pao wrote in Friday’s edition of a newspaper owned by one of the wealthiest human beings on the planet.

Ah, you can’t make this stuff up.

Pao, a tech investor, was addressing the big purchase of Twitter stock by Tesla’s Elon Musk and Musk’s critical view of Twitter’s practices of censorship — censorship that has included booting a then-sitting president of the United States, Donald Trump, off the platform in January 2021.

Pao is not amused.

Elon Musk’s vision of “free speech” will be bad for Twitter, @ekp writes in @PostEverything https://t.co/KIjpZ6gu3P

“For those of us who care about equity and accountability, Musk’s appointment to such a prominent role at a platform that serves hundreds of millions of users daily is highly disconcerting — a slap in the face, even,” she wrote.

Pao has her equity bona fides. She and six other women founded Project Include, aimed at diversity and inclusion in the high-tech industry.

And she has the scars from her battles in Silicon Valley. In 2012 she filed a discrimination suit against her employer Kleiner Perkins after its top executives, including a man who mentored her, deemed her unqualified for promotion.

She sued, claiming retaliation from a junior partner with whom she was romantically involved.

And she’s alarmed that Musk believes Twitter should be less restrictive on “speech that many see as hateful, abusive or dangerous.”

Critical of Musk’s claim to be “a free-speech absolutist,” Pao said private platforms should not allow everything to be published.

Teenage girls have been harmed by postings on Facebook, she wrote, and former CEOs of Twitter have expressed regret for what they have allowed to be posted on their platforms.

Of course, because Pao’s argument is ultimately against the peskiness of free speech and its attendant First Amendment, to bolster her position she must provide some direct and indirect ad hominem attacks against Musk.

There is rampant sexism and racism at Tesla, she said, citing some court cases against the company.

That’s proof, according to Pao, that Musk should be nowhere near social media.

“There are clearly dangers to creating workplaces in which people feel free to say and do things that demean their co-workers,” she said. “There are dangers to abetting such abuse on social media platforms, too.”

In addition, Pao wrote “Musk’s appointment to Twitter’s board shows that we need regulation of social-media platforms to prevent rich people from controlling our channels of communication.

On Sunday night, Twitter CEO Parag Agrawal announced Musk would not be joining the Twitter board after all.

Pao said that without regulation of social media, people will continue to be harmed, especially “those who have been harmed for centuries — women and members of marginalized racial and ethnic groups.

“The people who benefit from unrestricted amplification of their views will also be the same people who have benefited from that privilege for centuries,” she concluded.

So is that the real gripe of Pao, daughter of Taiwanese immigrants — Musk is a white man; guys like that must be censored?

No one advocates absolute freedom in media.

U.S. laws have done a good job of providing limits regarding libel, slander, calls for violence and pornography.

But traditions following court cases surrounding the First Amendment have provided adequate protections against media abuse while recognizing the importance of the free exchange of ideas.

That free exchange remains something that individuals like Ellen Pao — and all of Silicon Valley — must be kept from limiting or destroying.

Continue reading: Oops: WaPo Tries to Start War with Musk, But Everything Goes Bad When People Notice What Got Printed ...