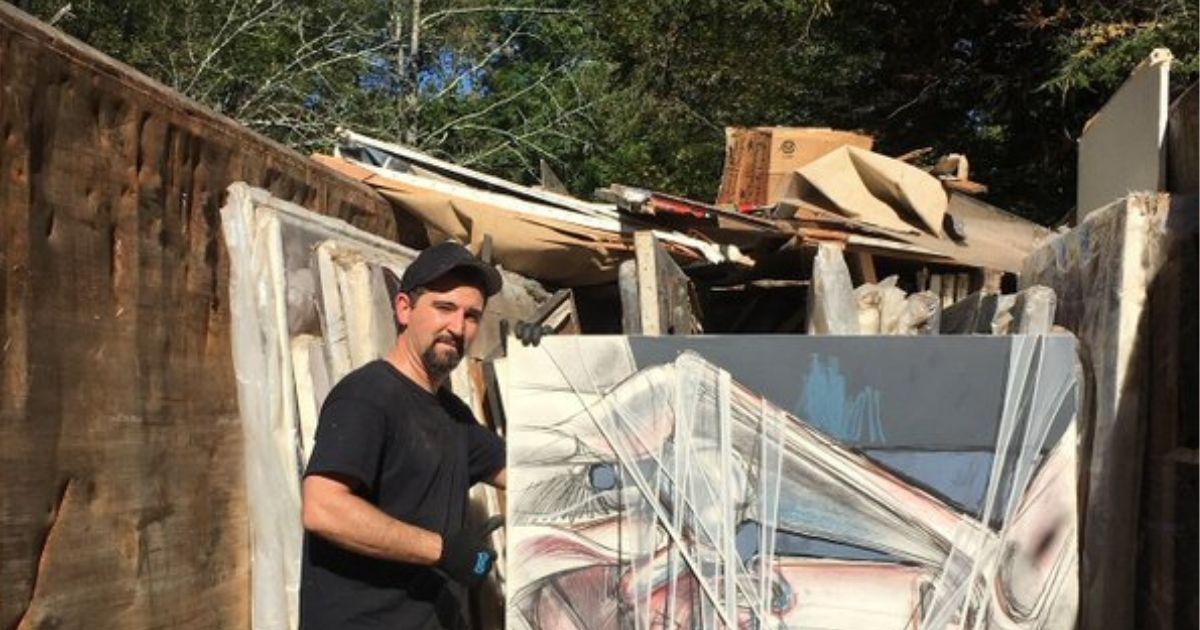 The following article, Mechanic Finds Batch of Giant, Unusable ‘Car Parts’ in Dumpster, Then Realizes He’s Rich After Cleaning Off the Dirt, was first published on Flag And Cross.

After finding a dumpster full of unwanted “car parts,” a Connecticut car mechanic traded a great story and a little elbow grease for an opportunity to save the work of a historic artist and earn an incredible windfall to boot.

In September 2017, Jared Whipple, a mechanic from Waterbury, Connecticut, got a call from a friend telling him of a strange find in an abandoned barn in Watertown. Whipple’s pal saw the dumpster of “car parts” and instantly thought Whipple would like to have them, the Connecticut Post reported Friday.

When the amiable mechanic arrived on the scene, he found not steel and plastic car parts but images of car parts painted onto huge canvases. There was one after another, some tattered and covered in grime from being discarded but all still brightly colored and full of graphic panache.

But what did he have, he wondered. Whipple immediately started looking on the internet to see if he could identify who painted the amazing canvases. And it wasn’t long before he learned that the paintings were crafted by Washington-born artist Francis Hines, who died in 2016 at age 96.

“I immediately started researching,” Whipple told the Post of the four years of hunting down information on the artist.

One of Hines’ more famous works was a series of 50 numbered paintings titled “Hoboken Autobody.” He also moved toward three-dimensional art with found objects embedded into the work.

Ultimately, the artist created giant works featuring “wrapping” art — enveloping large, outdoor objects in thousands of yards of fabric. For instance, in 2000, when he was 81, Hines stacked five cars in a pyramid and wrapped them in bolts of synthetic fabric.

Hines is considered an important abstract expressionist master who did much of his work in New York City.

The lucky mechanic built a large amount of research on the artist and even began contacting the master’s friends and family. Eventually, he found Hines’ sons, who gave him their blessing to keep their father’s work.

What to do with the canvases was a big question, of course.

Whipple told the Post that he initially thought the art would make a great addition to the walls of his indoor skateboarding park during the Halloween season. But the more he looked into Hines’ life, the more he realized that what he had here was a trove of lost artistic treasures of which the art world must be made aware.

How to get them to listen to him became a challenge. But Whipple was undeterred.

“I’ve always been a mechanic and I’m known in the skateboarding world but not in the art world. So trying to get people to even open your emails and take you seriously was a huge challenge,” Whipple told the Post.

He set out to track down members of the art community so he could tell them of his incredible and important find.

Whipple finally got the attention of retired art dealer Muldoon Elger, who had exhibited Hines’ work back in the 1980s. Elger, in turn, got Whipple in touch with art curator and historian Hastings Falk, the Post reported.

Falk said he was so excited about Whipple’s find that he immediately made his way to Whipple’s place in Connecticut. “I was just really surprised at what I saw,” Falk said.

Now, with Falk’s help, Whipple is choosing a select number of the Hines canvases to sell, and Falk thinks he could realize millions in the sale.

In 2017, a car mechanic went to retrieve art pieces that his friend had found in a dumpster at a barn.

Unbeknownst to him, the art had a price tag in the millions.https://t.co/c70lj40fjT

Some of Hines’ “wrapping” paintings can be sold at around $22,000 and his drawings at around $4,500, the curator said. That means all of the pieces are collectively worth “millions” of dollars.

But the money is not the only thing that Whipple thinks is important.

“I pulled it out of this dumpster and I fell in love with it. I made a connection with it,” he told the Post, adding that he hoped to bring Hines back before the eyes of the art world.

“My purpose is to get Hines into the history books,” Whipple said.

It just goes to show what a little hard work and dedication can do for you. Many other people might have just thrown these important works of art in the trash. But Whipple dedicated his time and effort to get them the recognition they deserve.

Whipple’s friend who gave him access to the paintings might be kicking himself for just giving the valuable canvases away, but Whipple just knew that with a little leg work, these wonderful pieces of art could be brought before the world.

The lesson here is that you never know what is waiting around the corner for you if you just use your wits and put in some hard work.