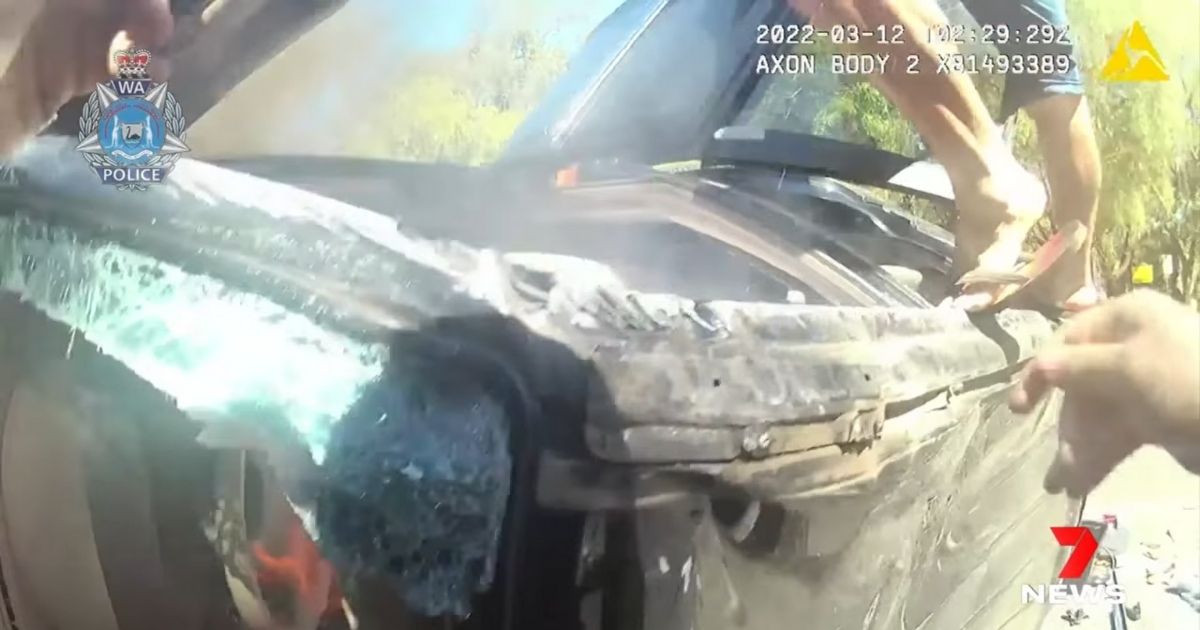 An elderly couple traveling through Harvey in western Australia nearly lost their lives last month when the trailer they were pulling fishtailed and rolled on the South Western Highway.

The car pulling the trailer twisted onto its side and burst into flames, the couple trapped inside. Unable to remove their seatbelts, they were doubly trapped as the flames grew, getting closer and closer to the gas tank.

Onlookers called for help, some approaching the wreck and attempting to help. When first responders arrived around 10:30 a.m., one unnamed man had already tried to rescue the couple.

“Traveling to next camp spot yesterday, we got caught up in the chaos of car & van roll over in Harvey,” Diane Holtmeulen, who was on the road behind the wreck, posted on Facebook on March 12.

“Thankfully both occupants are OK. We were amazed at the bravery of one man who climbed onto the burning wreck to free the driver. Certainly gave us both a fright.”

As Senior Constable Kylie James and Probational Constable Reece Josemans approached the vehicle, they asked if anyone was still inside.

“There’s two people in the car,” a woman replied, according to the U.K.’s Daily Mail.

Seeing the situation was dire, Josemans started urging the couple to free themselves.

The man in flip-flops stood on top of the burning car, holding one of the doors open while one of the officers battled the flames with a fire extinguisher, putting his own safety on the line.

Eventually, the officers managed to cut the seatbelts and pull both occupants from the vehicle — and not a moment too soon. As they retreated, the car ignited with an explosion so big that it shook the ground.

“Always goes through your head is the fact that the car exploded after,” Josemans said later. “It makes you think we only had a minute.”

“I remember just making eye contact with the two occupants,” he said. “At that point in time, I didn’t know how they were going to come out but I knew I had to find a way.

“I remember the feeling of the fire, it was the most unbearable … you know you’ve got to get them out.”

The man and woman were taken to the hospital with non-life-threatening injuries. On April 9, the Western Australia Police Force shared the bodycam video from the incident.

“On Saturday 12 March 2022, police were called to the South Western Highway after a vehicle towing a caravan crashed and was on fire,” its post read. “The officers who pulled a couple from the burning wreck have spoken of the split second decision making that saved two lives.

“Incredible images of the crash scene and the frantic rescue efforts were captured on body worn camera and can now be shown publicly for the first time. The video has been compiled by WA Police Force with the knowledge and cooperation of the couple who were rescued, and their family.”

While the name of the good Samaritan who leaped into action despite not being dressed for the occasion has not been shared, hopefully he has seen the video and knows that his efforts contributed to the rescue of the couple.

For Josemans, it was the success that made all the difference. He’ll never forget hearing the woman say “you saved my life.”

“That, to me, is everything,” he said. “Job done. The best feeling in the world.”