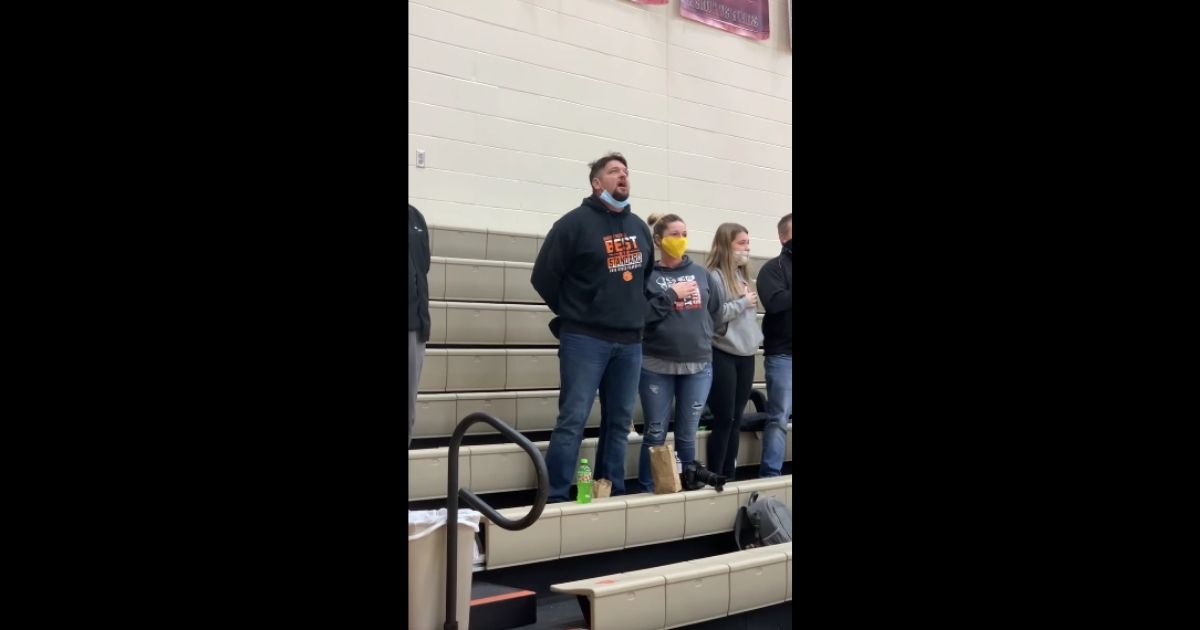 The following article, Dad’s Spontaneous Anthem Performance Brings ‘Everyone in the Gym to Tears’ Before Basketball Game, was first published on Flag And Cross.

In a glimpse of the vast reservoir of patriotism that lies beneath the surface of American life, one parent stood tall when the sound system failed before the start of a high school basketball game.

On Dec. 4, 2020, the Waverly High Tigers and the Portsmouth West High Senators were preparing for their game in West Portsmouth, Ohio.

When the time came for the masked crowd to rise for “The Star-Spangled Banner,” a complication arose.

Nope. This was not the NFL, and nobody decided to kneel in protest.

Instead, the sound system failed to work, leading to moments of silence amid foot-shuffling.

As the awkwardness grew, one player’s father, Trenton Brown, was soon prompted to remedy the situation.

Stepped up and RIPPED the anthem when the sound system failed

@budsnanny
I just came across this news story.
I love this Dad – so endearing and warms my heart.

He is just a regular guy , I like what he does at the end.

I hope you like the vid & the story! #PattyOnSitehttps://t.co/SGFDEzpGlC

“I looked over at the announcer, and the music didn’t play and didn’t play, and I looked over and he was getting a little frustrated. My wife gave me a little nudge and said ‘Sing’ and I said, ‘All right,'” Brown told CNN.

Brown soon began singing from his spot in the stands, leaving everyone in the gym stunned by his incredible voice.

Brown had experience in singing and performing, but it was the first time he’d ever tried the challenging national anthem solo.

“There was a lot of awkward silence … and then I started singing and that was it,” he said.

When it was over, he sat down as if he had not done anything remarkable.

The moment may have come and gone, but thanks to Johnny Futhey, whose son is a teammate of Brown’s son on the Waverly team, the video was shared with the world.

“He brought about everyone in the gym to tears when he saved the day by standing up in the crowd and singing the anthem,” Futhey said.

Futhey said the video did not capture the moment of patriotism around the gym as players and fans joined while Brown sang.

“When I originally posted, I thought it would get some interest but didn’t realize it would be like a million views!” he said.

“I posted it because I was like, the world needs to see this.”

Continue reading: Dad’s Spontaneous Anthem Performance Brings ‘Everyone in the Gym to Tears’ Before Basketball Game ...

I took your poll, but would not submit..