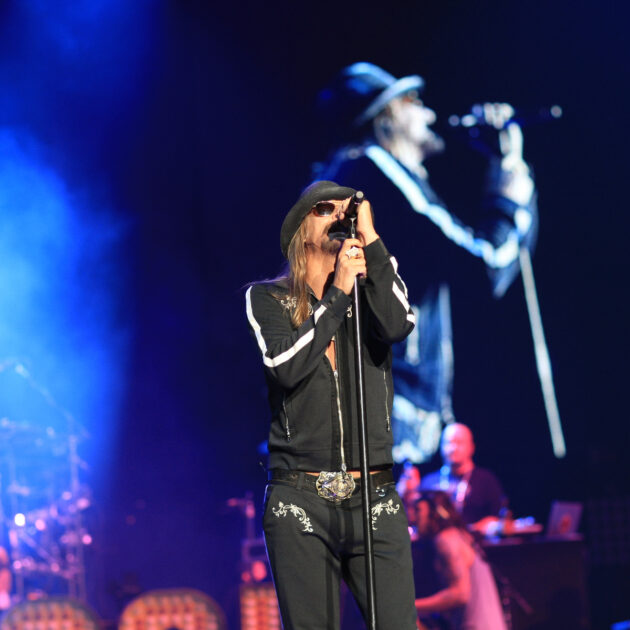 The following article, Watch: While Biden Was Likely Tucked In for Bed, Trump Makes Surprise Appearance at Wild Kid Rock Concert, was first published on Flag And Cross.

Former President Donald Trump made a surprise cameo on the first stop of Kid Rock’s “Bad Reputation” tour — to the delight of the musician’s legions of fans.

Trump, who is golf buddies with Kid Rock (real name: Robert Ritchie), greeted concertgoers via video during the rocker’s show at the Ford Center in Evansville, Indiana, on Wednesday.

A TikTok video posted by a fan immediately went viral. So far, the clip has garnered more than 101,000 “likes.”

“Hello, everyone. I love you all,” Trump said in the video. “You’re going to have a great time at the Kid Rock concert tonight. Quite frankly, he’s amazing.”

He added: “All of you in attendance are the true backbone of our great country: hardworking, God-fearing, rock ‘n’ roll patriots.”

The 45th president, an avid golfer, then poked fun at Kid Rock‘s golf skills while lauding his musical talent

“Bob is truly one of the greatest entertainers of our time — not the best golfer, by any means,” Trump joked. “His golf game could use a little work. But a great, great entertainer, and that’s why you’re there.”

Another great day on the links! Thank you to POTUS for having me and to EVERYONE at Trump International for being so wonderful. What a great man, so down to earth and so fun to be with!! KEEP AMERICA GREAT!! -Kid Rock pic.twitter.com/cSsswI5PbW

President Joe Biden likely wouldn’t have the energy to stay up late enough for a concert like this. In contrast, Trump can’t get enough of massive events, day or night.

The former president wrapped up his appearance by invoking a modified version of his popular campaign slogan.

“Let’s all continue to love one another, fight for our God-given freedoms, and most of all, let’s make America rock again!” he said.

The brash billionaire then put on a red “Make America Rock Again” cap and said, “Have a wonderful time tonight. God bless you, and God bless America.”

The crowd erupted into raucous cheering.

Kid Rock then opened his concert with his hit No. 1 single, “We the People,” according to USA Today.

Kid Rock has been a vocal Trump supporter ever since the former president launched his White House bid back in 2015.

In an interview last month with Fox News host Tucker Carlson, the rocker said he really enjoys golfing and chatting with Trump because he’s mentally sharp — unlike Biden.

“He sits down and just cuts it up. You start cutting it up,” Kid Rock said in March. “How sharp he is, it’s incredible.

“You can see how you watch a Joe Biden interview and the Trump interview. You are just like, ‘There is no comparison.'”

The musician said he really appreciates Trump’s candor and outspokenness, which is a stark contrast to contrived, scripted politicians.