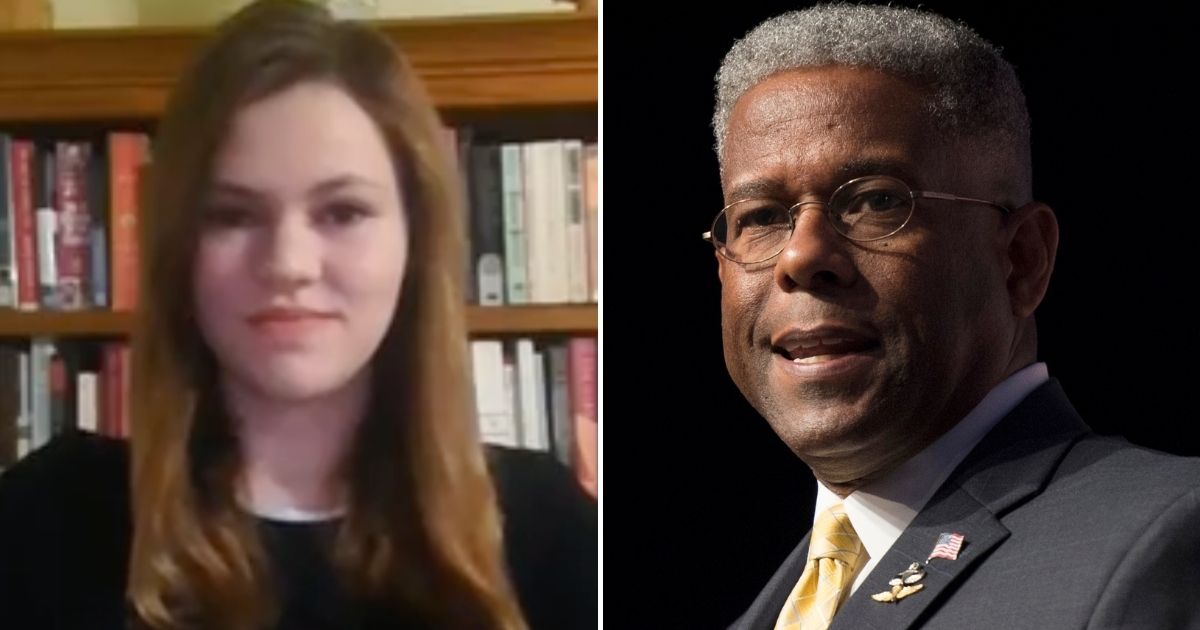 The following article, Student Forced to Hide in Bathroom as Woke Mob Hunts Her for Inviting Prominent Black Republican to Speak, was first published on Flag And Cross.

An angry mob chased down a University of Buffalo student Thursday after she had organized an event featuring black Republican Lt. Col. Allen West.

In the event “America Is Not Racist—Why American Values are Exceptional,” West, a Republican former congressman and former chairman of the Republican Party of Texas,  discussed how he overcame racism.

“It was a great lecture, house was packed,” Therese Purcell, the president of the university’s Young Americans for Freedom club, told WKBW-TV.

However, when the retired Army lieutenant colonel and political commentator finished his speech and the question and answer session began, tensions began to flare, with students becoming infuriated by what West had to say.

Those tensions eventually gave rise to students running after Purcell, who had to hide in a bathroom until police arrived to escort her out to safety. Officers also escorted West to safety from the unruly mob.

BLM protestors who didn’t make it into the event screamed from the hallway, trying to drown out @AllenWest. pic.twitter.com/oZ4gA8B0PP

“I was really afraid for my life since they physically assaulted my friend, and like I said, they were screaming, no peace,” Young Americans for Freedom President Therese Purcell told Fox News in a Monday interview.

“I don’t think they were going to do anything remotely peaceful. They were a very angry mob, and they were clearly saying that they were trying to chase me, that they wanted to capture me,” Purcell told “Fox & Friends” co-host Todd Piro.

“So I’m afraid of what would have happened if I wasn’t able to hide from them,” Purcell said.

Purcell said Young Americans for Freedom organized the event because they “want to bring these dialogues to campus. We think everyone has a right of freedom of speech,” WKBW-TV reported.

She also said that a student involved in organizing the event was kicked and punched in his ear.

“The University at Buffalo is deeply committed to being a safe and welcoming place for all people, and a place where freedom of expression occurs without threats and in a respectful and civil manner,” the university said in a Friday statement, according to WKBW-TV.

“The university is conducting a thorough review of events and activities leading up to, during and after an appearance by former congressman and retired Army Lt. Col. Allen West, including the posting of anonymous social media messages threatening students protesting West’s speech and harassment of students after the speech,” the university added.

“As a university community, we will continue to strive to be a place where all students can express themselves, be heard and live their lives in a welcoming and safe environment that values diversity and inclusion.”

A university spokesman told Buffalo News that three separate harassment complaints were filed with the police by three people.

“I didn’t think it was going to be as controversial … to say on an American campus that American values are a good thing,” Purcell said, the Daily Mail reported.

“American values are worth protecting. I don’t think they like Colonel West’s message that he did experience racism … but he overcame that, and he decided not to be a victim … and that America gave him that equality of opportunity that many other countries don’t.”

Continue reading: Student Forced to Hide in Bathroom as Woke Mob Hunts Her for Inviting Prominent Black Republican to Speak ...