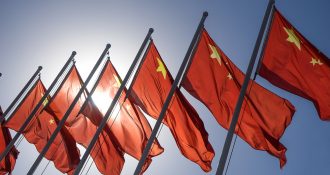 The following article, Report: China ‘Executes’ Citizens by Removing their Hearts and Organs to Sell on Organ Trade, was first published on .

According to a recent study, China executes prisoners by tearing out their organs while they are alive to sell the body parts for organ transplants.

The horrific news came from a study by the Australian National University (ANU) which found that condemned prisoners were not brain dead when their organs were cut out of their still living bodies.

The ANU report said that the loss of their organs was the “proximate cause” of their deaths.

“Might the transplant surgeon become the de facto executioner? Evidence suggestive of such behavior has emerged over many years from the People’s Republic of China (PRC),” the report stated.

The report went on to explain that China’s government surgeons broke the cardinal rules for organ transplants, the “dead donor rule,” that maintains that organ donors must be at least brain dead before organs are removed.

The ANU report found 71 reports from the Chinese government with documented evidence of “problematic declarations of brain death,” predicting that the number of such incidents – where prisoners were likely alive and the removal of their organs killed them – occurred.

“The data we rely on in this paper involves transplant surgeries from 1980 to 2015. During this period, there was no voluntary donation system and very few voluntary donors,” the researchers write. “According to three official sources … the number of voluntary (i.e., non-prisoner) organ donors in China cumulatively as of 2009 was either 120 or 130, representing only about 0.3% of the 120,000 organs officially reported to be transplanted during the same period (on the assumption that each voluntary donor gave three organs).”

“The leader of China’s transplant sector wrote in 2007 that effectively 95% of all organ transplants were from prisoners,” the researchers observed. In the dozens of examples of “problematic” removal of organs, the study found that, “given that the donors could not have been brain dead before organ procurement, the declaration of brain death could not have been medically sound.”

“It follows that in these cases death must have been caused by the surgeons procuring the organ,” the researchers declared. “If the reports we examine are accurate, they indicate that heart and lung procurement by the surgeon was the proximate cause of the prisoner’s death, thus directly implicating the surgeon in the execution.”

So, China is tearing out the organs of live prisoners and leaving them dead on the “operating” table.

This is the country with which the NBA, Disney, and Joe Biden are working so hard to become friends.