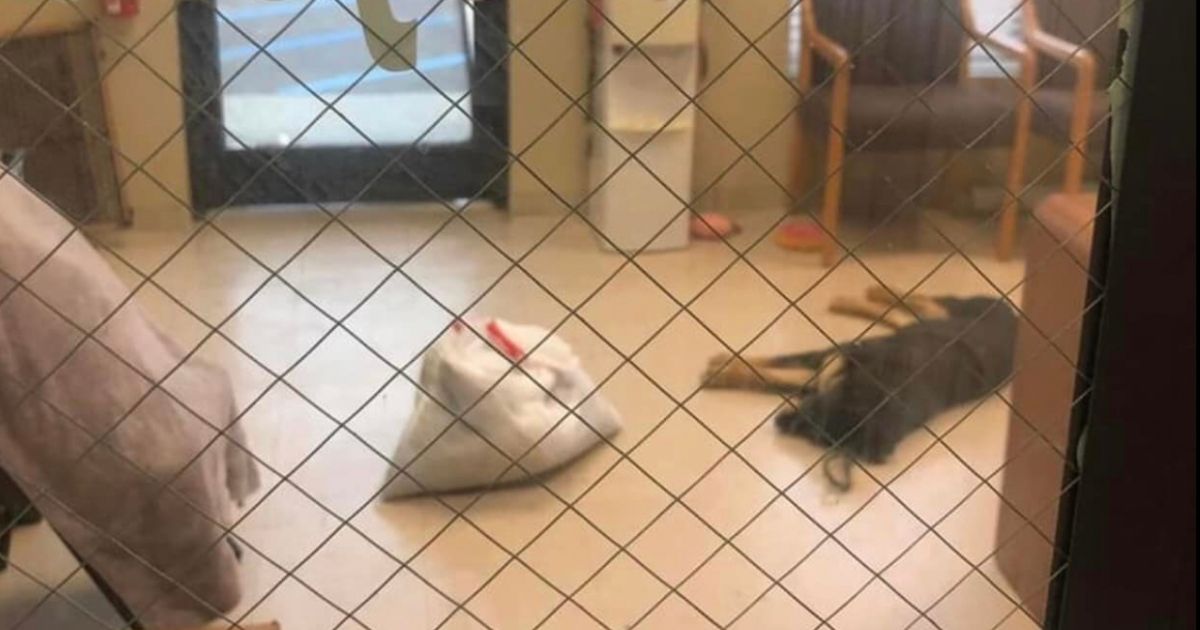 The following article, Homeless Teen Living Under Bridge Forced to Give Up Dog, Then Strangers Rally to Save Them Both, was first published on Flag And Cross.

If you have a dog that means the world to you, you know how dire your situation would have to be to force you to give them up.

A young man in Tate County, Mississippi, found himself and his pup in less-than-ideal living situations under a bridge. He was just 17, and his pup was a 4-month-old rottweiler/German shepherd named Jada, but he was trying to make it work.

He got a tent and tried to leave Jada there while he looked for a job, but she broke out. Unable to earn money and quickly working through their rations, the owner was forced to make a terribly difficult decision, taking her to the Senatobia-Tate County Animal Shelter.

“I was just sitting up here in the office and had just finished some cleaning and saw a young man walking across the field with what looked like a dog in tow,” Interim Shelter Director Kris Robinson told WREG.

After the owner explained his situation and the fact that he was running out of food, Robinson determined to find some space.

“So he asked if we could take her, and I said, ‘Of course,'” Robinson said.

“This is where she layed after her owner surrendered her today with her plastic bag of dog food and a blanket,” the shelter posted on Facebook. “She is devastated.

“I can’t be mad at her owner though. He is 17, says he lives under a bridge in Tate county. He WALKED her all the way to the shelter and asked us to please take her because he can’t afford to keep her.

“She’s about 4 mos old and she kept herself pinned to his legs while he was here. We are full but how could we not take her in.”

And with that story posted online, a beautiful thing began to happen. Moved by the young owner’s tenderness and plight, people began offering to donate funds or offer a room to help the young man and his dog get back on their feet.

Just a few days later, the shelter had a heartwarming update.

“[T]he homeless teenager who brought this baby to the shelter to surrender her because he couldn’t give her what she needs is getting the help he needs,” they shared. “He has a place to stay and will be soon getting his dog back.”

“If you would like to help here is what you can do — we’d like to get the dog spayed and get enough flea/tick and heart prevention for a year at least for her — if you’d like to donate please do so through PayPal and use fosasenatobia@gmail.com — you can also donate for the young man — monetarily or Walmart gift cards — I know he would appreciate the help, both for him and for his dog. I will make sure everything gets to them — thanks everyone for your concern for both of them — the response from people everywhere has been touching.”

WREG shared that Friday morning, the teen (whose name is being withheld for privacy reasons) and Jada were reunited and are staying with a local family who offered to house them both while he sorts things out.

It’s sad to think that any young person could find themselves in such dire straits, but it’s encouraging to know that there are still so many good people out there willing to make good things happen for complete strangers.

Continue reading: Homeless Teen Living Under Bridge Forced to Give Up Dog, Then Strangers Rally to Save Them Both ...