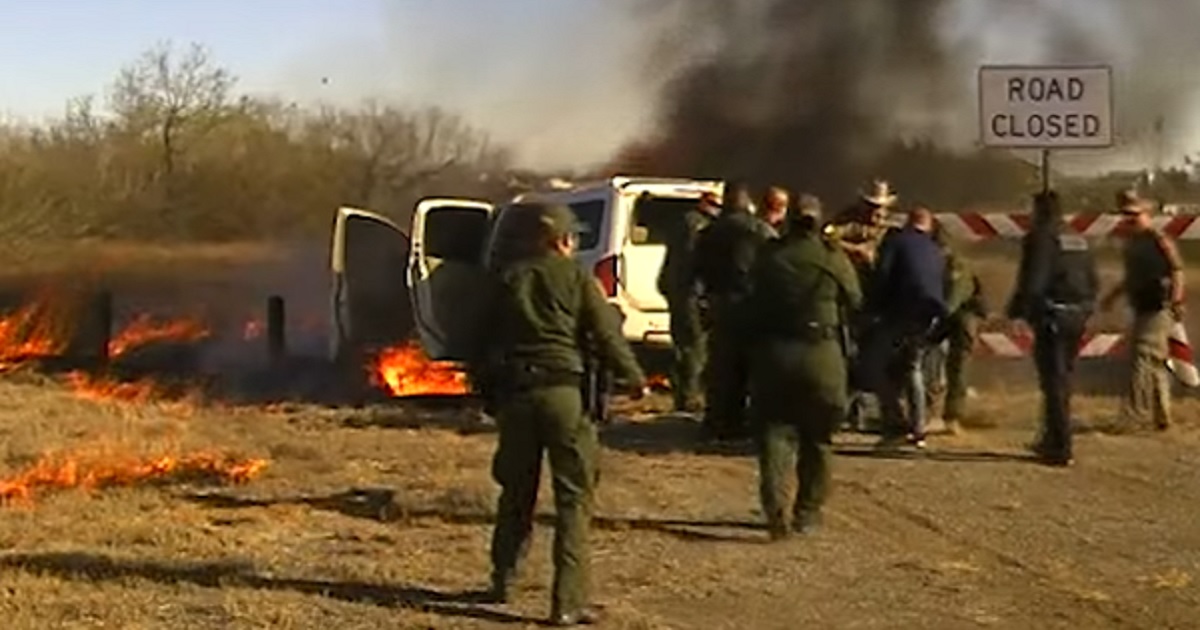 The following article, After High-Speed Chase, Car Bursts Into Flames: Police Find Woman in Duffel Bag, Pull Her to Safety, was first published on Flag And Cross.

The Encinal Police Department in southern Texas gets to deal with a lot of human smuggling incidents due to its close proximity to the border. But one smuggling attempt law enforcement encountered last month was a close enough call that it’s left them reeling.

According to a report from KENS-TV in San Antonio last week, Border Patrol agents on March 23 were tracking an SUV from Laredo whose driver was suspected of human smuggling, and Encinal Police Chief Pablo Balboa put down his paperwork and joined in.

After leading his pursuers on a high-speed chase, pushing 130 miles at some points, the SUV driver turned onto a dead-end road, crashed into some poles, jumped out of the vehicle and took off running, KENS reported.

Meanwhile, the SUV started burning, so Balboa did a sweep of the car to make sure no one was inside. He didn’t spot anyone.

As the driver was caught and dragged back to the scene, he spotted the flames leaping from the SUV and started screaming.

Perplexed, officers ran to the vehicle, and one grabbed his baton and started to break out the back window. Once the glass was clear, they saw only a duffel bag in the back.

Clearly, the bag contained something, but whatever it was wasn’t making any sounds or moving as the car continued to burn.

“We knew there was something in the bag, but we didn’t know what was in there,” Texas Department of Public Safety Sgt. Geraro Hinojosa said, according to KENS. “When I unzippered it, there was a female looking up.”

Within a minute of the woman being pulled free, the entire SUV was burning and it burned until nothing but scrap metal remained. It also started a grass fire, KENS reported.

While the woman’s identity and country of origin were not made public, authorities did confirm that the 22-year-old was not a U.S. citizen. Both she and the driver were turned over to Border Patrol custody.

The officers involved are thankful they were able to rescue her in time, as it’s far too easy to imagine what could have been.

“We would have never got the screams out of our heads had we not saved her,” Balboa said. “It would have been something that would have lived with us forever.

“She was just in that duffel bag like, like a piece of clothing. The emotion that I had when she came out, tell you the truth, was anger. Anger because these people do not care.”

“She didn’t say anything to us. I wonder why. Like, was she instructed not to say anything?”

Hinojosa also knew how close the woman had come to tragedy.

“She was trapped inside that zippered bag, it would have been just a matter of time before we would not be able to save her,” Hinojosa confirmed.

“It’s human smuggling, but could be human trafficking as well. And, what makes this case unique is that there was only one immigrant there. So, what were their intentions, or what were they going to do with her? We don’t know.”