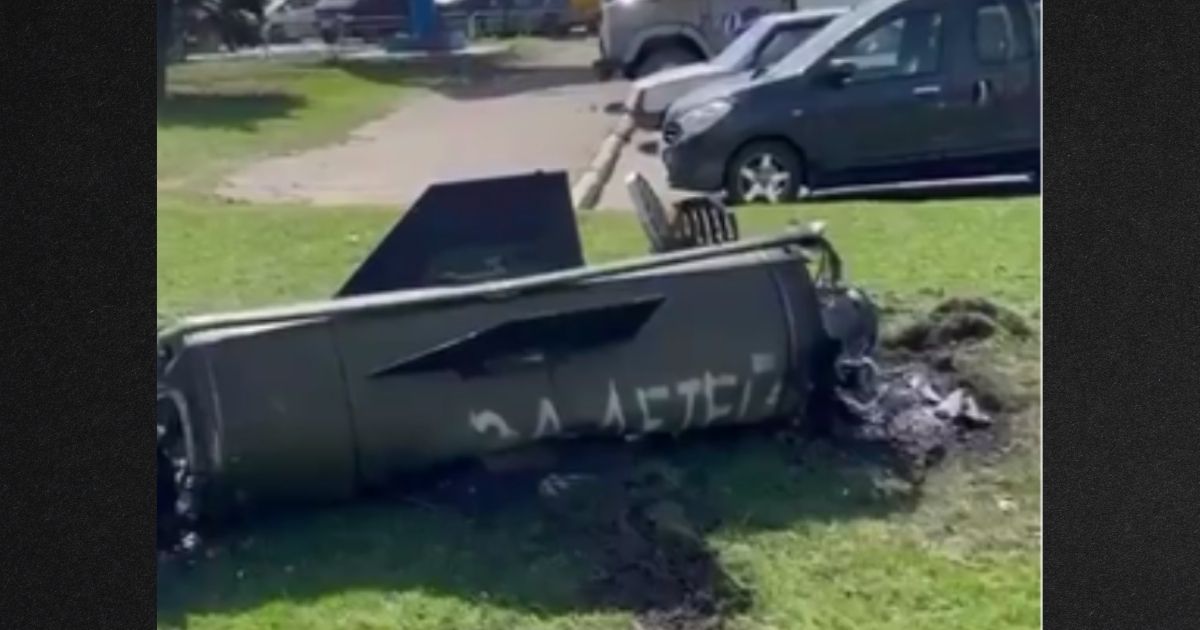 The following article, Russian Missile That Hit Packed Train Station Reportedly Had Troubling Phrase Written On It, was first published on Flag And Cross.

A few words reportedly scrawled on the Russian missile that targeted civilians at a railway station add a new level of horror to the attack that killed more than 50 people.

According to ‘photos from the scene shared by Ukrainian President Volodymyr Zelenskyy and others, a piece of the Russian ballistic missile had the words “for the children” painted upon it, according to the Wall Street Journal.

Although photos of the missile part were shared on social media, it was impossible to independently verify that the message seen on the missile part as it lay amid the dead was put there by Russian forces before the missile was sent to kill civilians in Kramatorsk.

BBC Russian Service journalist:
Before launching the rocket that killed and maimed dozens at the Kramatorsk train station they wrote “for the children” on it. Cannibals. https://t.co/nSj1WYQBQH

“We arrived 15 mins after the missile exploded outside the Kramatorsk train station,” Washington Post report Dalton Bennett tweeted. “We counted at least 20 dead including 2 children. Spray painted on what remained of the Tochka-U ballistic missile ‘for the children.’”

At least five children were killed in the attack.

Witnesses described seeing victims literally blown apart by the explosion, according to The Washington Post.

“People were screaming. There were explosions everywhere,” Anton Ladygin, 18, said. He was among several witnesses who said multiple explosions were heard after the missile hit.

Russia is “cynically destroying the civilian population,” Zelenskyy wrote on Instagram. “This is an evil that has no limits.”

At the time of the attack, an estimated 4,000 people had gathered as the city was bracing for a new Russian onslaught.  Officials estimate more than 100 people were injured when the ballistic Tochka-U missile hit Friday.

Russians “clearly saw that they were hitting civilians early in the morning, that at the station at this time there were thousands of people trying to evacuate, families, children, elderly,” Oleksiy Arestovych, an adviser to Mr. Zelensky, said.

Russia officially denied the attack but said it was targeting rail stations to prevent Ukraine from getting military supplies into the region.

A report in The New York Times, citing a senior Pentagon official who was not named, said Russia did indeed fire the missile.

“They originally claimed a successful strike and then only retracted it when there were reports of civilian casualties,” the official said.

Crowds had been flocking to the station for days.

“We were there yesterday, and we saw hundreds of people crowding the station, trying to leave,” Christopher Stokes, emergency coordinator at Doctors Without Borders, told the Wall Street Journal.

“The hospitals had been urgently calling us to evacuate their patients by train. It is a big question whether we will be able to evacuate more people,” he said.

Nathan Mook, an aid worker, said the carnage could have been worse, according to the BBC.

“One of our guys at the warehouse said he had seen Ukrainian air defense intercept one of the rockets,” he said. “These were missiles, he could see the wings on the missile as it was intercepted.”

World leaders responded to the carnage with stern words.

Ukrainian civilians are fleeing the worst. Their weapons? Pushchairs, teddy bears and suitcases. At Kramatorsk railway station this morning, families waiting to leave suffered the unthinkable. Dozens are dead, hundreds wounded. This is an abomination.

President Emmanuel Macron of France said the attack was  an “abomination.”

“Ukrainian civilians are fleeing the worst,” he tweeted “Their weapons? Pushchairs, teddy bears and suitcases.”