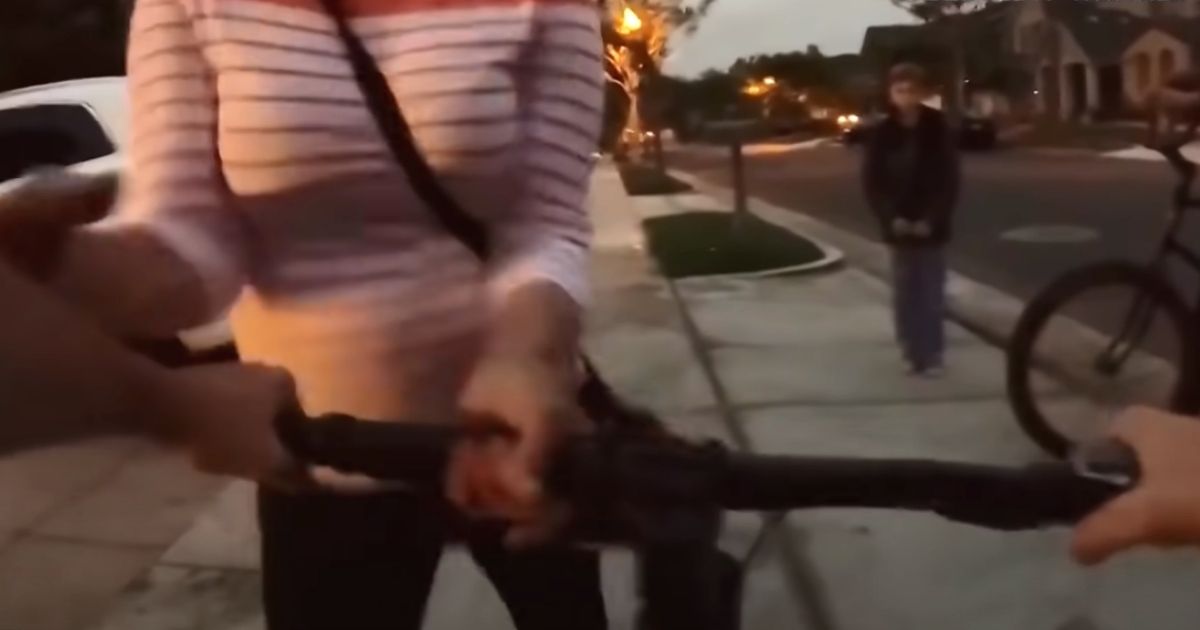 The following article, Woman Lashes Out at Boy on Bike, Lame Attempt to Blame It on Him Collapses When GoPro Footage Is Released, was first published on Flag And Cross.

A tragic hallmark of the past few years has been the rapid deterioration of “civilized society” and the flippant weaponization of the “victim card” to deflect personal responsibility.

In the latest example, Susan Garcia of California was charged with battery after allegedly hitting 12-year-old Jeffrey Vandervort, who was riding his bike on the sidewalk of their gated Santa Ana community.

Garcia claimed that Jeffrey had intentionally tried to run her over and that’s why she lashed out, KTLA-TV reported on Wednesday.

Unbeknownst to her, the boy had recorded the entire incident on a GoPro camera he was wearing.

The video clearly showed he never tried to run Garcia over, nor was he the aggressor in any way.

Video from Jeffrey’s camera showed him riding around his neighborhood.

When he noticed Garcia standing in the middle of the sidewalk, he stopped several yards away from her. At the time, she appeared to be scolding two young boys, one of whom was on a bike.

When Garcia saw Jeffrey, she immediately yelled, “Get the hell off the sidewalk, now!”

She walked toward him, grabbed his bike’s handlebars and shoved him as he said, “Excuse me? Please don’t touch me.”

As the boy moved off the sidewalk, he appeared to be struck.

She replied, “Want me to hit you again?”

When the boy told Garcia she was not allowed to touch him, the unhinged “Sidewalk Karen” fired back: “I’ll do what I want!”

The 12-year-old recounted the incident to KTLA: “She walked over to me and just started yelling and pushed me into this little tree and then hit me in the back.”

Whitney Gregory, Jeffrey’s mother, said Garcia had no right to attack her son.

“People in the neighborhood should come directly to the parent. They should never confront a child, harass a child,” Gregory told KTLA. “It’s so outrageous.”

Gregory said she had specifically instructed her son to ride on the sidewalk instead of the street because he was nearly hit by a car the previous week.

Garcia falsely tattled to Jeffrey’s mom that he had tried to run her over with his bike.

After Gregory reviewed the GoPro video, she called the police and reported Garcia. Santa Ana police confirmed to KTLA that she was charged with battery.

“I think she needs to be held accountable for what she did,” Gregory said.

In general, children are allowed to ride on sidewalks because it’s dangerous for them to bike in the streets.

In California, there is no state law prohibiting anyone (adult or child) from riding on the sidewalk. However, adults generally do not cycle on sidewalks.

However, this incident isn’t about biking etiquette. It’s about how important it is these days for people to be vigilant so they’re not falsely accused of wrongdoing.

If Jeffrey wasn’t recording the incident, we might never have learned the truth about what transpired.

This episode also spotlights how frivolously people make false accusations and resort to violence these days.

The United States is quickly devolving into a lawless, uncivilized cesspool. Sadly, this White House not only condones but actively incentivizes this appalling decay.

Continue reading: Woman Lashes Out at Boy on Bike, Lame Attempt to Blame It on Him Collapses When GoPro Footage Is Released ...

I never would have thought to have my child wear a device that records, but looks like a good idea I will tell to my kids for my grandkids. This would also be helpful in school to know who is bullying (one of my granddaughters was bullied on the bus last week) and what is being done in the classroom.