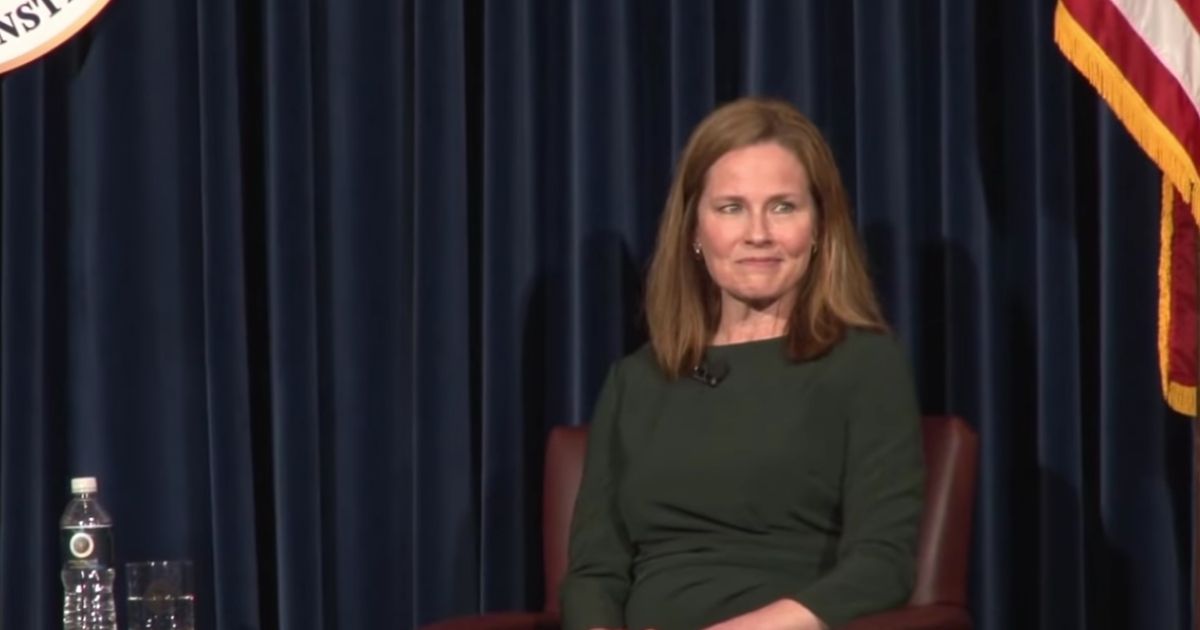 The following article, Audience Explodes in Applause After Amy Coney Barrett’s Sharp Response to Immature Heckler, was first published on Flag And Cross.

Supreme Court Justice Amy Coney Barrett delivered the perfect riposte to shut down a heckler during comments in Simi Valley, California, on Monday.

Barrett was speaking at the Ronald Reagan Presidential Library. Sadly, not everyone in the audience was a respectful spectator.

Still, Barrett’s rapier wit was enough to cut the creep down to size in short order.

Frederick J. Ryan Jr., chairman of the library’s board of trustees, had asked Barrett about what she and her family went through amid speculation in 2018 that she might be picked to take the seat of former Supreme Court Justice Anthony Kennedy.

But as Barrett explained what happened when some members of the media were desperate to get photos of her near her home, she was interrupted by a heckler. The interloper was heard blurting out something about Barrett being an “enslaver of women.”

Fortunately, the outburst was not well-received by those who came to listen to the justice speak. Regardless, Barrett had an apt response after the woman was removed from the audience.

“Fortunately, as a mother of seven, I am used to distractions — and sometimes even outbursts,” Barrett said following the childish interruption, much to the delight of the crowd.

Isn’t it telling that leftists like this intemperate heckler equate having and raising children with “enslaving women”? The left so hates the nuclear family unit.

Barrett later said she found it very hard going from being a mostly unknown judge to being in the spotlight of the Supreme Court.

“I think one of the difficult things that I experienced that I wasn’t really fully prepared for was the shift into being a public figure,” she said.

Barrett made other news during her visit to the Reagan Library, as well.

She gave a very brief glimpse into several important decisions the court will be releasing this year on key issues including abortion and Second Amendment rights.

Barrett urged Americans to take the time to carefully read the decisions when they are released and not to make snap judgments about what they mean.

“Does [the decision] read like something that was purely results-driven and designed to impose the policy preferences of the majority, or does this read like it actually is an honest effort and persuasive effort, even if one you ultimately don’t agree with, to determine what the Constitution and precedent requires?” Barrett said.

Should Jackson be confirmed — which seems likely — she will become the most radical left-wing justice the court has ever seen.

During public hearings, Jackson skirted key questions on legal issues from abortion to education to gender politics, refusing to say when she thinks life begins and strangely claiming that she can’t even define what a “woman” is.