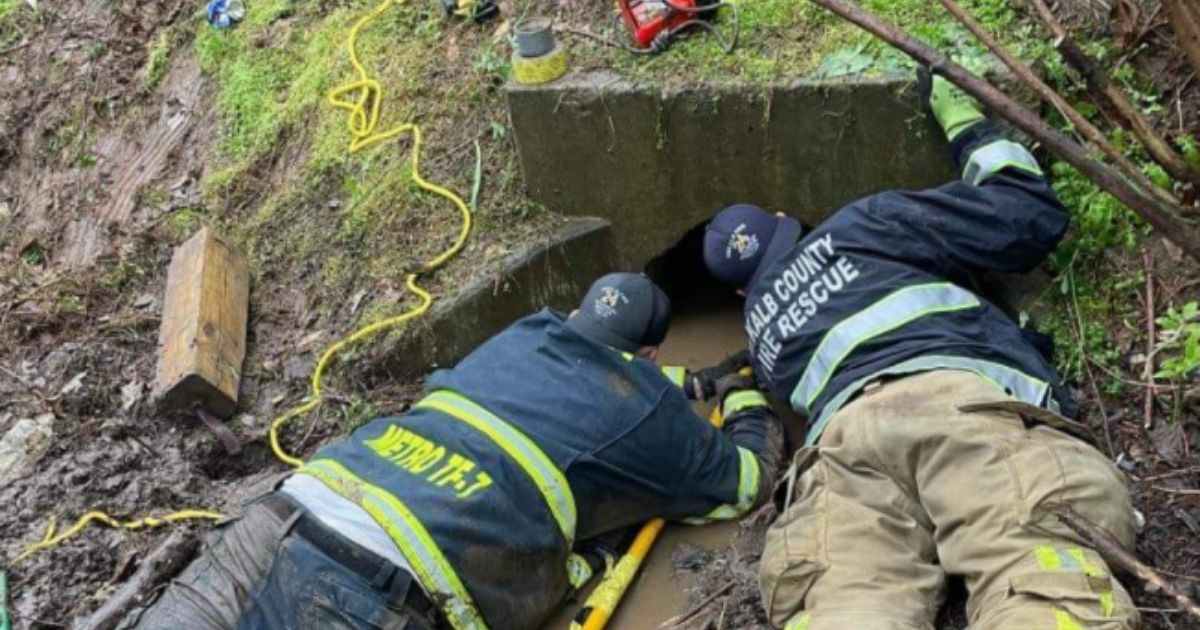 The following article, Firefighters Rescue Exhausted Dog Stuck in Muddy Storm Drain, Offer to Let It Stay at Station, was first published on Flag And Cross.

Thursday morning, a Georgia dog found itself in a rather sticky predicament. It had managed to crawl into a storm drain that was actively channeling water and full of mud, and then it became exhausted and got stuck.

Dekalb County Fire Company 24 came to the poor pup’s rescue and shared photos of the rescue that took place in Stone Mountain, Georgia.

“Today crews were called out to a dog trapped in a storm drain,” Dekalb Company 24 posted on Facebook. “Heavy24, E14, Sq14 arrived on scene of a dog that had got stuck in a storm drain and had been too exhausted to get itself out.”

In many cases when an animal gets trapped in a drain pipe, someone is able to shimmy in and physically retrieve the pet, but not so in this case.

“The pup crawled into a section of pipe about 50 feet long that was too small for any crew members to be able to crawl in,” the post continued.

“With a combination of pike poles, snares, ropes, and a few other make shift tools, crews were able to successfully retrieve the dog. Great job everyone.”

The dog appeared to be an older pit bull mix of some sort. Once white and gray or black, the bedraggled dog was a muddy brown and looked absolutely exhausted.

While the dog was wearing a red collar, it didn’t have any identifying information. That wasn’t really an issue for the firefighters, and they offered to house it if no one came forward.

“The dog has a collar but no owner could be found,” the post read. “If this dog looks familiar please reach out to Dekalb County Animal Shelter.

“Otherwise this pup has a warm welcome at station 24 if necessary.”

“Thank you all for what you do!” one person wrote on their post. “Thank you for your compassion for not just humans, but animals as well!”

“I’d take him!!” another wrote. “Give him a bath and bone and I bet you have a grateful pup.”

“I say make him a station dog!” wrote another.

Eventually, the fire company shared that they had located the owner and the tired pup was back home.

“**update,” they shared. “[O]wner has been found and reunited with the dog. Thank you for everyones help.”